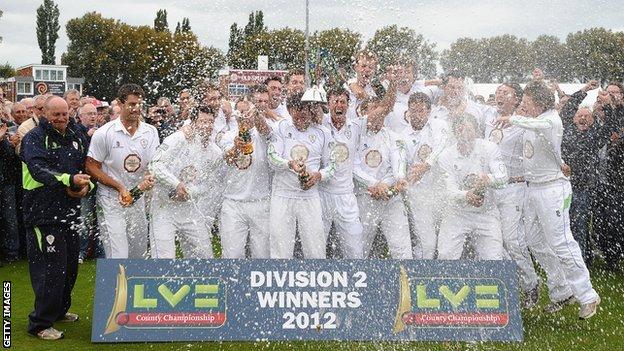 Usman Khawaja scored his second half-century of the game as Derbyshire beat Hampshire by six wickets to win the Division Two title.

Derbyshire have never been promoted before but were relegated in 2000 - the first year the championship was split into two divisions.

Bilal Shafayat top-scored with 81 as Hampshire were dismissed for 198.

The hosts wasted little time in the morning session, taking the last four Hampshire wickets for the addition of 58 runs.

Shafayat could only add 29 to his overnight total before being run out and Wes Durston (2-36) helped mop up the tail.

Openers Wayne Madsen (24) and Paul Borrington (21) set Derbyshire on their way, but both fell in consecutive overs in a pre-lunch wobble.

Durston added 23 in just under an hour and Dan Redfern contributed 11, before Khawaja and Whiteley came together to guide Derbyshire to the title and a £135,000 cheque.

"A terrific victory for unfancied Derbyshire to take the Division Two title.

"Shafayat and Chris Wood held the hosts up for 45 minutes in the morning but, once they had gone, the rest fell away.

"Set 196 to win, two wickets immediately before lunch with the total at 45 set home nerves jangling. But Khawaja was the rock around which victory was eventually secured.

"Aided by the middle order and Ross Whiteley in particular, who hit a quick-fire 38 with five sixes, the home side could celebrate their first silverware for 19 years at a little after three o'clock."