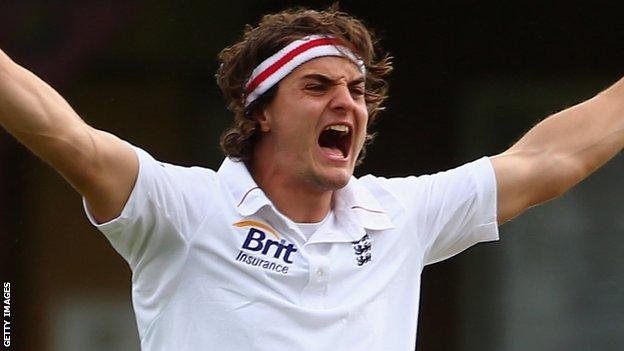 The 28-year-old arrived at the County Ground via minor county Oxfordshire and Surrey's second XI, and has 118 first-class wickets at an average of 28.95.

Head coach David Ripley told BBC Northampton: "He doesn't particularly want to leave but he has international aspirations and wants to win trophies.

"I think we've done everything we could to get him to stay."

Ripley continued: "Financially, he's one of our highest paid players and we like to think we've managed his injuries.

"I think Jack appreciates all that. It's not a decision he's taken lightly. We would've liked him to stay but it wasn't to be. He's a very well-liked personality around the club and a very fine bowler."

Brooks said that he has been offered opportunities that are "too good to turn down."

"I want to compete at the highest level possible," he added. "I owe it to myself to explore all avenues as I continue my quest for international honours.

"I have thoroughly enjoyed my time at Northants and fully appreciate the support I've been given by all at the club.

We did well to find Jack, we polished him up a little bit and he's worked very hard himself

"Hopefully, I'll be remembered for my performances and wholehearted approach to the game."

Brooks, who played village cricket until the age of 20, made his debut against Australia in 2009 and earlier this summer, collected six wickets to help the Lions to victory over the West Indies.

"He's someone that we picked up late in cricket," continued Ripley. "We did well to find him, we polished him up a little bit and he's worked very hard himself.

"I hope he can go on and have international success. It'd be good for Northants because we've had a little say [in his development]."

Ripley also said that Luke Evans could be the bowler who is tasked with replacing Brooks, although the head coach has not ruled out a move for another player.

"Luke stuck his hand up at the end of the season," said Ripley. "He has had injury problems but [it was] encouraging to see him take his opportunity.