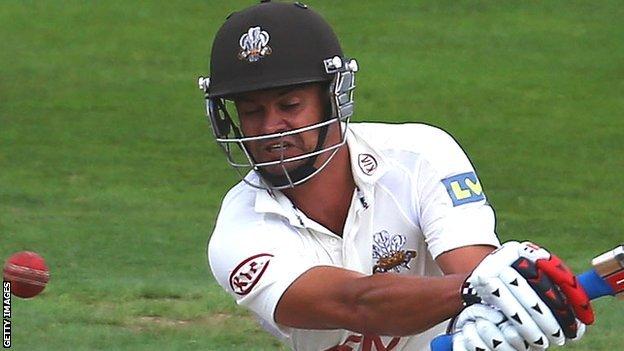 After the first two days were washed out, de Bruyn ended day three on 105 not out, hitting two sixes and six fours in over four hours at the crease.

Opener Rory Burns made 73, while 21-year-old Tom Jewell is unbeaten on 57 in his first Championship match of the season.

Luke Procter was the pick of the Lancashire bowlers with 2-41.

"A day for debutants at Aigburth with two young Lancastarians making their first-class debuts, and both were in the action.

"Fast bowler Tom Bailey, 21, who hails from Preston, was handed the new ball and he responded by taking the first wicket - a fine delivery which nipped back in to bowl Zafar Ansari.

"The game is also seeing Steven Croft captaining the side for the first time in the Championship.

"Will he and his Surrey counterpart Gareth Batty agree to set something up for tomorrow's final day or are we heading for a tame draw?"