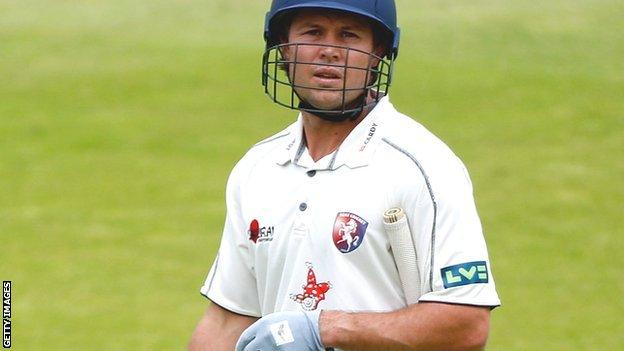 Kent's hopes of gaining promotion to Division One of the County Championship ended as they fell to a seven-wicket defeat against Glamorgan in Cardiff.

Robert Croft ended with match figures of 7-107 in his last Glamorgan game with his side set 61 runs to win.

They comfortably reached 61-3 with William Bragg top scoring with 25.

The victory, Glamorgan's third of their championship season, ensures the Welsh club do not finish the campaign bottom of the Division Two table.

Kent had needed a win to have any chance of promotion but the defeat leaves them in the second division for the 2013 campaign, the third successive year they will have not been playing in the top flight of English cricket.

John Glover and Jim Allenby, who had scored 55 and 125 not out respectively in Glamorgan's first innings, were the pick of the Welsh side's bowlers.

Glover took 3-43 and Allenby collected 3-47 as Kent lost last their four second-innings wickets for only 36 runs.

Kent's defeat means Derbyshire and Yorkshire are the teams promoted from Division Two.

"A deserved victory for Glamorgan, who won all bar one session of the match, and a wonderful send-off for Robert Croft who, fittingly, took the last Kent wicket to fall.

"Croft was given a guard of honour as he left the pitch and was soon celebrating Glamorgan's win as well.

"Kent at least restored some pride after a dismal day two. Geraint Jones' gritty knock, his seventh half-century in this year's Championship, included a six out of the ground, bound for the River Taff."