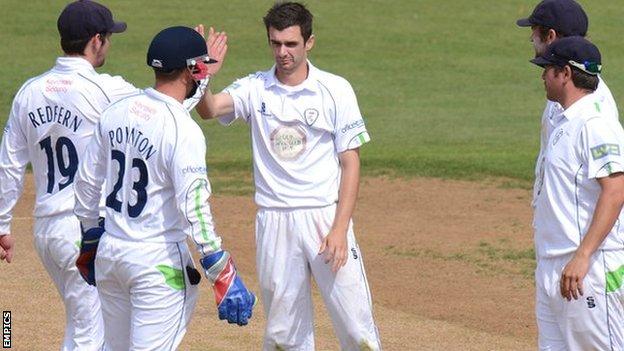 Derbyshire trail Hampshire by 139 runs but have been promoted to Division One after Kent lost to Glamorgan.

Third-placed Kent took three points from their and cannot catch Derbyshire or Yorkshire.

It is Derbyshire's first return to the top flight since relegation in 2000 - the first year the Championship was split into two divisions.

After the hosts were bowled out for 275, Hampshire closed on 142-6 in their second innings.

Bilal Shafayat made a patient unbeaten 52, while Ross Whiteley took 2-6 in five overs.

Whiteley had earlier reached 57 not out as Derbyshire took their overnight total of 167-5 to 275 all out.

The East Midlands club are now vying with Yorkshire for the honour of going up as champions of Division Two.

Derbyshire went into the final game of the season with a one-point lead at the top of the table but have taken five bonus points, while

"The entire club has been working all season for this. It is tremendous

"There has been a lot of hard work.

"Thank you to all our supporters and sponsors and we are delighted to win promotion for them."

"It feels tremendous. Just one more day of cricket to come tomorrow [Friday].

"We try and win the whole thing [Division Two title] and the lads will be fired up to win it.

"We have put so much effort and energy into it and we can't wait to test ourselves against the best."

"Derbyshire secured promotion thanks to the efforts of Glamorgan at Cardiff, but will now want to go on and win the title.

"And they have every chance of doing so as Hampshire slipped to 142-6 in their second innings, a lead of just 139.

"Earlier, Derbyshire eked out a first-innings lead of just three runs thanks to 57 not out from Whiteley, who shared an eighth-wicket stand of 63 with Tom Poynton (24).

"Given a day of clear weather, it appears Derbyshire's title to win....or lose."