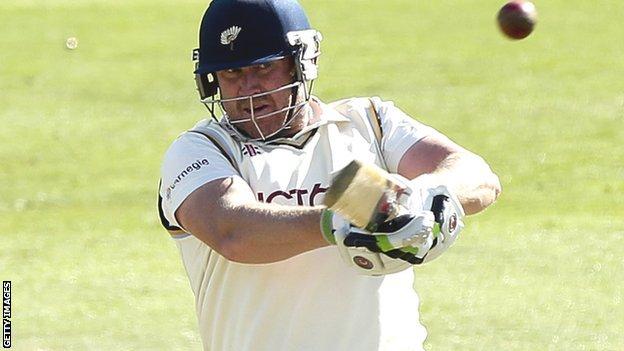 Yorkshire have clinched promotion to Division One after rivals Kent lost their crucial match against Glamorgan.

The Tykes, who celebrate their 150th anniversary next season, were relegated in 2011 but will be back playing in the top-flight of English cricket in 2013.

Yorkshire can also win the Division Two title if they beat Essex at Chelmsford and Derbyshire fail to beat Hampshire.

Yorkshire began the third day on 44-3 and they added 208 runs on Thursday with Azeem Rafiq scoring 75 not out, while Anthony McGrath made 68 and Adam Lyth added 51.

Essex's Graham Napier took 4-54 in the second innings to go along with the 5-67 he collected in the first innings to end with match figures of 9-121.

Before the start of the season, Yorkshire president Geoffrey Boycott insisted promotion back to Division One was the county's main aim for the season.

The club have responded well to the challenge as they are the only side in the two divisions to remain undefeated throughout the County Championship campaign.

They need to claim eight wickets on the final day at Chelmsford on Friday to beat Essex.