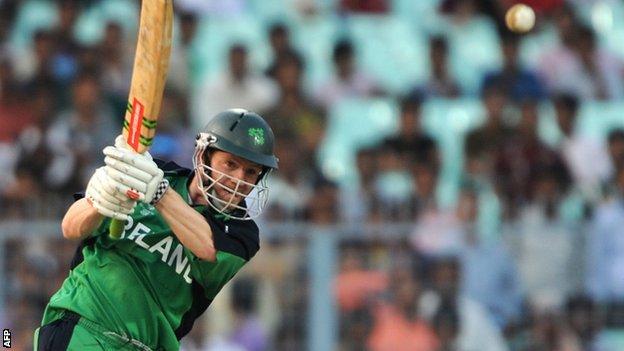 Niall O'Brien starred as Ireland eased to a 54-run victory over Zimbabwe in the latest ICC World Twenty20 warm-up match in Columbo on Thursday.

The wicketkeeper-batsman hit 62 runs while his brother Kevin struck an unbeaten 30 from 15 balls.

Ireland posted a daunting 181 and Zimbabwe could only manage 127 in reply, with George Dockrell and Alex Cusack each taking three wickets.

The Irish start the competition against Australia on 19 September.

Ireland take on Bangladesh on Monday in their final warm-up game.

The tournament opener against the Aussies is followed by a meeting with the West Indies five days later.

"I'm delighted with that knock - I haven't had too much T20 practice in the last three to four weeks so its nice to get runs early in the tour," said Northamptonshire player Niall O'Brien.

"In the past I've gone into tournaments in good form and hopefully that will be the case this time around.

"There are no easy groups. Australia have had a wretched time of it lately but are still a useful side while the West Indies will start as group favourites.

"However, they can blow hot and cold and hopefully we can catch them on a bad day."

Ed Joyce added 29 to the Irish total while Zimbabwe's top scorer was Hamilton Masakadza with 44.

Joyce's unbeaten 53 helped Ireland to a seven-wicket win over Sri Lanka A on Monday.