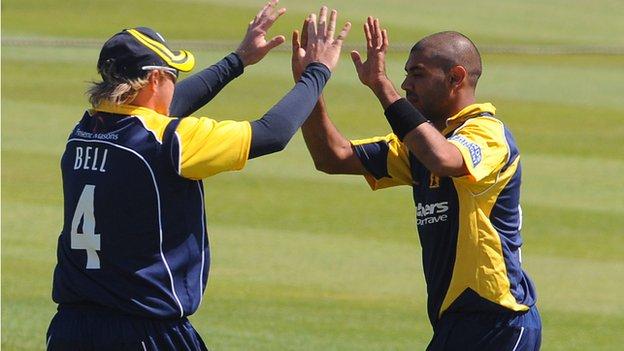 Warwickshire captain Jim Troughton will have no qualms about picking the Bears' star international duo Ian Bell and Jeetan Patel for Saturday's CB40 final against Hampshire at Lord's.

England batsman Bell will be allowed to play by the England and Wales Cricket Board, while Patel is just back from New Zealand duty.

"We've one or two decisions but they're nice problems to have," said Troughton.

"To get guys like Belly and Jeet Patel back for a final is great," he added.

"We've picked up some momentum in this competition and to have them back puts us in with a great chance.

"One or two guys will have to miss out but they're aware of that.

"This was always a squad effort from day one, in both one-day and four-day cricket."

Bell has made just three CB40 appearances for the Bears over the past two summers, all bizarrely, against Northants.

But he is a proven performer at Lord's, where he has twice won the man-of-the-match award in Warwickshire victories.

His unbeaten 65 on his first appearance at the home of cricket as a 20-year-old helped steer the Bears to a five-wicket Benson & Hedges Cup final win over Essex in 2002.

And Warwickshire were indebted to him for his match-winning 107 off 95 balls to help them beat Somerset by three wickets in the 2010 CB40 final.

Bell even hit 54 there in his one losing domestic one-day appearance - against Saturday's opponents Hampshire in the 2005 C&G Trophy final.

And his availability, given his recent experience opening the batting for England in one-day cricket, actually makes him an automatic replacement for William Porterfield, who is away with Boyd Rankin on Ireland international duty.

From the team that disposed of Lancashire in the semi-final, Patel will probably replace Paul Best to face a Hampshire side who have already won silverware this season too - the FL t20 at Cardiff last month.

To be able to walk through the Long Room at Lord's leading my players will be something I'll treasure forever.

And, although Richard Johnson is standing by, wicketkeeper Tim Ambrose, who has never played in a Lord's final, is now expected to be fit following the freak thigh injury he sustained during the semi-final win over Lancashire at Old Trafford.

"Tim Ambrose is a warrior of a man," said coach Ashley Giles. "If he's got any chance he'll be there.

"He's been a major part of this team and he deserves it.

"It's a grade one tear which generally takes 10 days to recover from. But, if not, then we've got a brilliant deputy in Richard Johnson.

"We've got good depth to our squad and what we've done this summer bears testament to it."

There remains an injury worry over paceman Keith Barker, who left the field after bowling one post-lunch over at Trent Bridge on the second day of the Bears' Championship clash against Nottinghamshire on Wednesday - but he may not have started anyway.

Troughton admits that the priority at the start of this week was simply trying to win their final Championship game against Nottinghamshire.

And, although they ended up spending most of Friday warming up for Lord's by having to orchestrate a salvage operation to avoid defeat at Trent Bridge, Troughton insists that there was never a chance any of his team would have volunteered to take a rest.

In any case, Hampshire have had a very similar preparation just 16 miles down the A52 at Derby, being detained by Derbyshire in County Championship action until just before tea before having to make the same trip down the M1.

"Cricket can have a funny way of biting you if you take your foot off your gas," admitted Troughton.

"It was never a case of anyone wanting to protect themselves for Lord's. Nobody wanted to be rested.

"We've gone back-to-back games before and the fact that it's a final will just give us that extra impetus."

Now comes the serious business of going for domestic cricket's rare double of being county champions and winners of the major one-day knockout trophy at Lord's in the same season - to emulate Dermot Reeve's team of 1995.

"Everything is geared towards Warwickshire being successful and, if we can pick up that second trophy this year, it would be fantastic.

"A Lord's final is very special. This will be my fourth final, it's the home of cricket and the greatest ground on earth.

"And to be able to walk through the Long Room at Lord's leading my players will be something I'll treasure forever.

"Hopefully the fact that we've both already won something this summer will free up both teams to go out and put on a spectacle. And it would even better if we win to cap what has already been a great season."