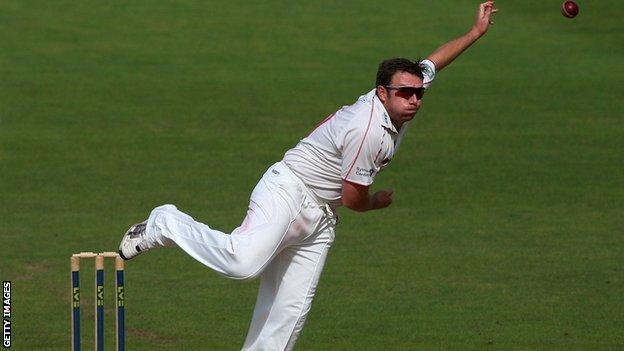 Kent face a battle to keep their promotion hopes alive after they had to follow on in their Division Two match against Glamorgan at Cardiff.

Robert Croft, in his last appearance for Glamorgan, took 5-31 before Kent reached 33-2 in their second innings.

Kent suffered a frustrating day on Tuesday but they just managed to claim their third bowling point on Wednesday as Matt Coles had John Glover (55) caught by James Tredwell in the 109th over.

Coles then took his second wicket of the day, trapping Michael Reed lbw, to end with first-innings figures of 4-76.

Kent looked well placed on 137-2 but the dismissal of Sam Northeast for 62, sparked a collapse as they lost their last eight wickets for 33 runs in 12.1 overs and failed to collect any batting points.

Glamorgan's Michael Reed (3-39) took the wickets of Darren Stevens and Coles in successive balls, before Croft claimed the final wicket for a five-wicket haul, his 51st in first-class cricket.

Kent made a terrible start to their second innings as captain Rob Key and Daniel Bell-Drummond were both dismissed without scoring with Graham Wagg taking both wickets.

The visitors need to score a further 187 runs just to make Glamorgan bat again and will resume on Thursday with both Northeast and Brendan Nash on 15 not out.

"Kent came to Cardiff with hopes of victory and promotion, but day two belonged to the side fighting to avoid the wooden spoon.

"Jim Allenby's unbeaten century and a maiden first-class fifty from Glover set the tone, and when Kent's jitters set in after tea, Croft and Reed took full advantage with the ball, prompting a full-on collapse.

"Only the patient Northeast came out of the day with any credit for Kent, while Robert Croft may be reconsidering his imminent retirement after starring with the ball."