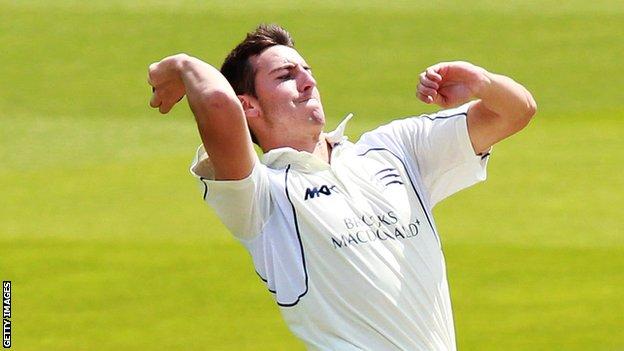 Middlesex bowler Toby Roland-Jones says he will not get carried away with his own form despite a successful year.

The 24-year-old took 61 wickets in the County Championship this season at an average of 19.13.

He told BBC London 94.9: "I've got ambitions in the game but I don't really think too far ahead.

"It would be nice to dream of one day playing at the highest level but that's not for now. It's a case of looking to build on Middlesex's season."

Roland-Jones says he owes a large part of his success to his team-mates at Lord's.

"We've got a lot of good bowlers backing us up who deserve a lot of credit with the likes of Gareth Berg, Corey Colleymore, Steven Crook and Steve Finn, and I enjoy bowling with Tim Murtagh a lot.

"It obviously helps when you have that sort of ability around you and it's nice to be a part of an attack that knows how to build pressure.

"We've got a pretty simple ethos when it comes to bowling, we all know our plans and we've got a great bowling coach here [in Richard Johnson].

"Learning from the likes of Colleymore and Tim Murtagh, you can't really go wrong."