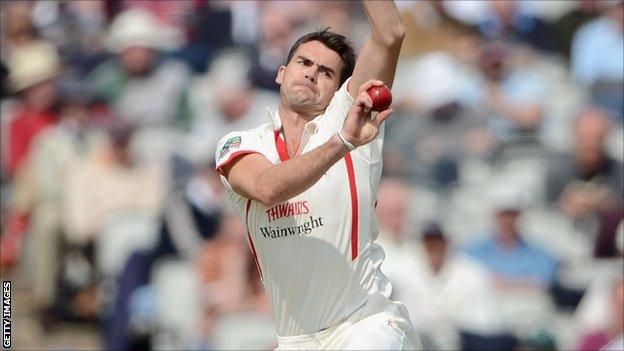 James Anderson has signed a new two-year contract with Lancashire.

The England pace bowler made his first-class debut for the county in 2002 and was awarded a benefit this year.

But 30-year-old Anderson has been restricted to a single Championship appearance for the Red Rose in 2012 due to his international commitments.

"I always love coming back to play for the club when my England duties permit me to and I'm delighted to sign for another two years," he said.

Director of cricket Mike Watkinson told BBC Radio Lancashire: "We don't see much of him but he's still very much one of our own.

"He's one of those players who just loves playing for Lancashire. He gives a whole-hearted performance when he's around, he trains hard and he's a great example for the players around him."

Lancashire, county champions in 2011, are coming to terms with relegation from Division One of the County Championship.

Batsman Karl Brown says the squad will use the hurt of relegation to inspire them next season.

"It's obviously not been the season that we would have hoped for, having won the Championship last year," said Brown.

"It's something that we've got to deal with as soon as possible and get our preparations right for next season.

"Everyone's upset with the situation we find ourselves in and I think we can use that as a positive for next season. We're going to be giving it our all next season to get back into Division One."