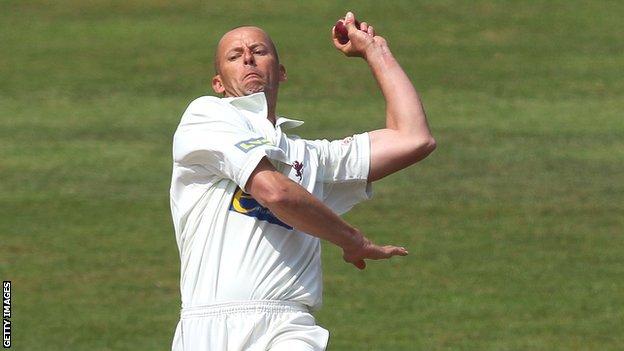 Essex seam bowler Charl Willoughby is retiring from the game and will leave the club at the end of the season.

The 37-year-old left-armer made the announcement on Twitter, saying: "I have decided to retire from professional cricket.

"It's been a fantastic 21 seasons. Thanks to all that have supported me over many years."

Willoughby, who also played for Somerset and Leicestershire, has taken 848 first-class wickets in his career.

His last appearance was in last month's Championship game against Glamorgan, with Essex preferring to give youngsters Reece Topley and Tymal Mills opportunities in the final games of the season.

"I have thoroughly enjoyed every moment of being a pro cricketer since 1994 but after the injuries I have endured this year and lack of cricket I have played this season, I have decided to move on from the game," he explained.

"I have really enjoyed my short time with Essex CCC and thank them for the opportunity afforded to me. They are a great club full of potential and wish them all the success in the future."

Born in Cape Town, Willoughby also played two Tests and three one-day international for South Africa between 2000 and 2003, but his career never took off at international level.

He eventually joined Leicestershire in 2005 but moved on to Somerset the following year as a Kolpak player.

He took 347 wickets in six years at Taunton before signing a two-year contract at Chelmsford last winter.

"I would like to thank Charl for his contribution this year at Essex but unfortunately it has not worked out for him," said Essex head coach Paul Grayson.

"He is a proven top-class bowler but picked up some niggles which have caused him to miss a majority of the season."