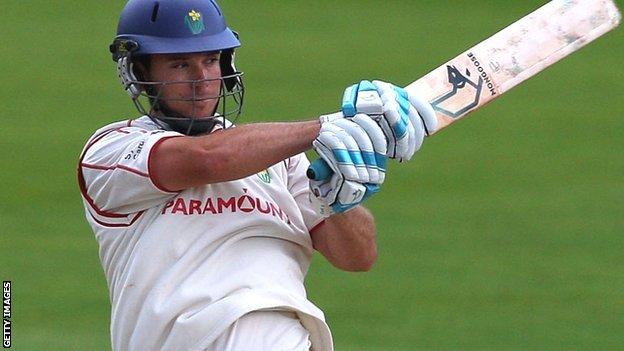 Jim Allenby scored 100 not out as Glamorgan frustrated promotion-chasing Kent on the first day in Cardiff.

The visitors, third in Division Two, elected to field, but bottom-placed Glamorgan reached 334-8 by stumps.

Stewart Walters made 63, William Bragg added 59 and John Glover will resume on 28 not out on Wednesday.

James Tredwell claimed 3-61 for Kent, who need to win the match and hope Derbyshire or Yorkshire slip up to gain promotion to Division One.

Nick James was the first man to fall, caught behind by Geraint Jones off the third ball, bowled by Darren Stevens, before Tredwell trapped Bragg lbw.

Although Glamorgan looked in a strong position, they collapsed from 175-2 to 188-5 with Walters, David Lloyd and Ben Wright falling inside four overs.

However, Allenby added 45 for the sixth wicket with Mark Wallace and an unbroken 82 with Glover for the ninth.

Kent have 12 overs on Wednesday to take one more wicket for maximum bowling points.