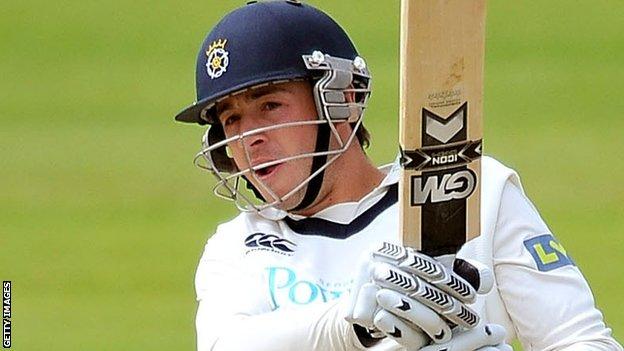 James Vince scored his first century of the season for Hampshire to frustrate promotion-chasing Derbyshire.

Tony Palladino (3-44) reduced Hampshire to 26-3 but Vince, who had not passed 50 in 16 County Championship innings this season, led the revival with 114.

Sean Ervine made 61 but David Wainwright's 3-69 helped the hosts hit back to dismiss Hampshire for 272.

Derbyshire, who went into the game with a six-point lead over third-placed Kent, closed 222 runs behind on 50-3.

"Hampshire finish the day with a lead of 222 in a game that is pretty even.

"Derbyshire are going to have to bat pretty well on Wednesday to make sure they get up to and in front of this Hampshire total.

"Their batting hasn't been too strong in recent weeks, but they're going to have to pull something out the bag in the next few days."