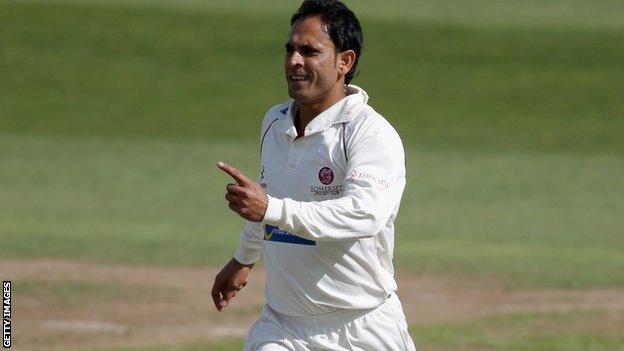 Somerset's Abdur Rehman produced the best bowling performance of his career as he claimed nine Worcestershire wickets on the first day at Taunton.

Pakistan spinner Rehman took 9-65 as relegated Worcestershire scored 212, despite 42 off 51 balls from Phil Hughes and 40 from Alexei Kervezee.

Somerset reached 142-0 by the close in the Division One clash and will resume 70 runs behind on Wednesday.

Arul Suppiah is unbeaten on 73, while Marcus Trescothick is 66 not out.

"It was a very special performance from Abdur Rehman and nobody on the ground, apart from the Worcestershire batsmen, would have denied him a 10-for, which certainly looked on as he changed the face of the game.

"Somerset had clearly prepared a pitch for him and he mesmerised some of the young Worcestershire batsmen, although from 165-4 they should have done a lot better, but how often have we said that this season.

"The young bowlers also suffered against Trescothick and Suppiah and only the older heads of Richardson and Ali managed to stem the the run flow.

"It's a tough learning curve in Division One cricket and some of the young Worcestershire players have a long way to go to reach the heights of some of their opponents."