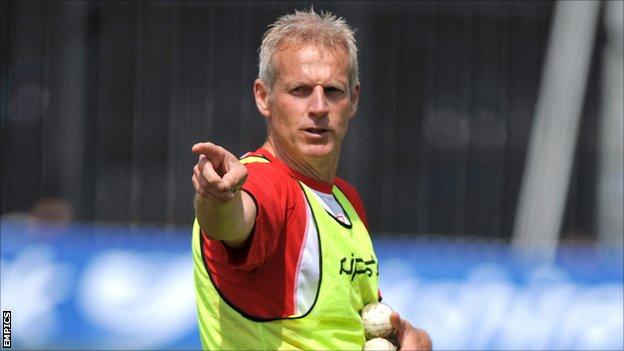 Head coach Peter Moores says it is important that no one overreacts to Lancashire's relegation from Division One of the County Championship.

They have gone down less than 12 months after winning the Championship title.

But Moores told BBC Radio Lancashire he does not expect to make significant changes to his playing staff.

"We'll play our last game and then we'll reflect to decide what we can move forward on to make sure we're more competitive next year," he said.

"You're always looking for opportunities to strengthen if the right person comes along, but we've made a fairly strong policy of playing Lancastrian lads when we think they're good enough to give them the opportunity.

"The lads are committed and they'll be hugely disappointed. We've got to come back next year with something because we want to bounce straight back out of that second division if we can."

Lancashire's relegation was confirmed with defeat at Middlesex.

Last year, the Red Rose had been celebrating their first outright Championship title victory since 1934.

We've got a winter to sort ourselves out, to come back stronger and be competitive in all forms of the game

But a slow start to the 2012 campaign left Lancashire struggling from the outset, and Moores believes it ultimately cost his side their Division One status.

"We lost three of our last four games and they came in a three-week period," he added. "After that, we've probably drawn every game bar one until Friday.

"So many games have been three-day games instead of four-day games. That's not making excuses, it's the same for everyone across the country, but that's what has made it frustrating.

"If you didn't get some early wins, you were under pressure. We didn't play well enough early on and, from then on, we were playing catch-up.

"There are reasons for it [relegation] but we shouldn't hide behind them too much. We've got a winter to sort ourselves out, to come back stronger and be competitive in all forms of the game."