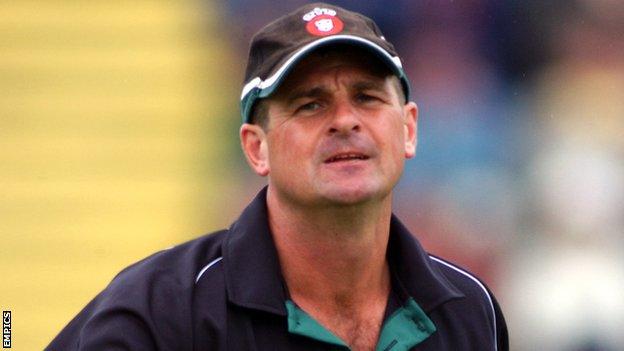 Worcestershire coach Steve Rhodes says his team have let their supporters down, following the pain of relegation to County Championship Division Two.

The county's fourth relegation in eight years was confirmed on Friday afternoon when seventh-placed Surrey completed victory over Nottinghamshire.

Rhodes is in his eighth season in charge at New Road, having taken over from Tom Moody in June 2005.

And, having still been on the playing staff when Worcestershire first went up to the top flight in 2003, he has balanced all those relegations by also building three promotion-winning teams.

Rhodes is also realistic enough that the buck has to stop somewhere.

"Every single person throughout the whole squad, and at the club, must feel under pressure," he admitted, following his side's crushing, relegation-sealing innings and 202-run home defeat by new county champions Warwickshire.

But, given Worcestershire's meagre resources, it is hard to imagine that anyone could have done a much better job in that time.

And Rhodes is adamant that he and his current backroom staff - Damien D'Oliveira and Matt Mason - have already sown the seeds of recovery.

"You have to look at it constructively and myself, Matt and Damien have put in a lot of work, putting in some challenging sessions," he added.

"It's been too early to see it bear fruit this season, which is frustrating.

"We've had some frailties exposed and we've got worse as the season has gone on."

Worcestershire's batting has been their chief downfall.

Even in this rain-ravaged cricket, for not one of their frontline batsmen to even get close to 1,000 runs in Championship cricket (skipper Daryl Mitchell is closest on 720) is a poor effort.

But Rhodes sees signs of promise from his young team.

"It wasn't built in a day," he said. "And, if we carry on those type of sessions in training, we will bear some sort of fruit down the line.

"And Moeen played really well in that second innings against Warwickshire.

"His footwork looked a lot better, which we'd worked on, and it's a good thing for us going forward seeing Moeen score runs."

Rhodes also applauds the tireless efforts of his chief strike bowler, 37-year-old Alan Richardson, who has defied an early season shoulder injury to take 53 wickets in 13 Championship matches (not that far behind last season's 73-wicket tally).

"Alan Richardson has done it all year long," said Rhodes.

"To see his efforts you admire that quality as a person rather than just as a cricketer."