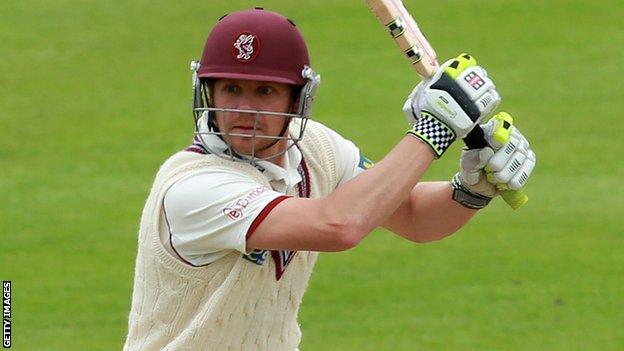 Somerset completed the second highest run chase in their history as they pulled off a five-wicket County Championship win over Sussex.

James Hildreth added 80 with Alex Barrow (40) before an explosive 166-run stand with Peter Trego inside 25 overs that took the game away from Sussex.

Hildreth finished unbeaten on 101, while Trego hit 12 fours and four sixes in his 89 not out off 72 balls.

Somerset's victory means that they go into the final round of matches in third, eight points behind surprise package Middlesex and a point ahead of Sussex in the race to finish second behind new county champions Warwickshire.

They entertain relegated Worcestershire in their final game at Taunton, while Sussex travel to in-form Durham.

Somerset, who lost four wickets in the last half-hour on Thursday, looked assured on the final morning, but Sussex got their breakthrough with the new ball when Barrow edged Steve Magoffin to Matt Prior at slip.

It proved to be their last success as Somerset sped to their target after lunch.

"This was a fantastic victory for Somerset in a game that they were frequently second best in.

"Shot out for just 134 on day two, then with Sussex 317 ahead with eight wickets in hand, the hosts were guilty of failing to capitalise and ultimately paid the price.

"With a depleted batting line-up, all Somerset's established batsmen had to stand up and they duly did."