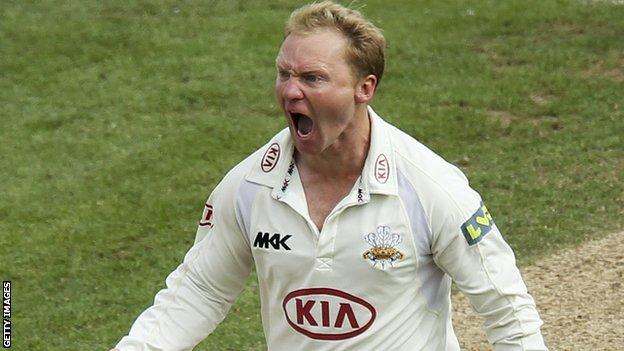 Gareth Batty took four wickets as Surrey secured their Division One status with a 195-run win over Nottinghamshire at The Oval.

The win confirmed Worcestershire's relegation, with Lancashire also down.

Surrey's victory meant last season's champions needed to beat Middlesex to stand any chance of beating the drop, but they slipped to defeat by 109 runs at Lord's.

The home side enjoyed the perfect start when nightwatchman Harry Gurney was caught at mid-off off the final ball of the first over.

Notts added 51 for the second wicket but after Riki Wessels was trapped leg before by Batty they crumbled.

Pietersen had Adam Voges caught at silly point before lunch, while Batty trapped James Taylor lbw shortly after the interval.

Pietersen struck again when he had Edwards caught behind, and spin continued to reap dividends when Murali Kartik had Chris Read caught at cover.

"Surrey completed an emphatic victory and picked up 21 priceless points thanks to Batty's four wickets.

"While Pietersen took a couple with his off-breaks as Notts crumbled on the final afternoon."

"Nottinghamshire were blown away and this result ended their unbeaten away record this season.

"Eight of the 10 wickets fell to spin, on a particularly helpful surface - but the necessary application wasn't there and it became a case of 'when' rather than 'if' Surrey were going to bowl them out.

"They now have to lift themselves up to face the newly-crowned champions Warwickshire next week, if the season isn't to be totally viewed in a disappointing light."