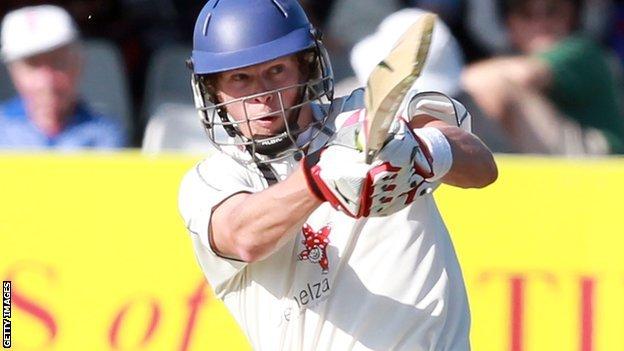 Northeast, 24 not out overnight, made his best score of the season as Kent dominated on day three at Canterbury against the Division Two leaders.

Derbyshire, chasing 404 to win, reached 30-1 at stumps after captain Wayne Madsen was dismissed without scoring.

Derbyshire's David Wainwright took 3-77 and Kent, aiming to score quickly, had Geraint Jones and Matt Coles both run out in the space of three balls.

The visitors, who need to score a further 374 runs on Friday's final day for the victory, made a shocking start to their second innings.

Madsen was out for a four-ball duck when a Mark Davies delivery fell to James Tredwell, who was back in the Kent side after missing the first innings on England duty.

With second-placed Yorkshire beating Glamorgan at Headingley, Derbyshire will be desperate to avoid defeat, while Kent will be pushing to claim the nine remaining wickets they need for the victory.

"It was definitely Kent's day and Sam Northeast's third century of the season has set up the chance of victory which their promotion hopes rely on.

"The wicket has flattened out here at Canterbury though and England spinner James Tredwell, who is playing in the last two days after replacing Adam Riley, could be key to day four.

"Derbyshire will need all their concentration to save the match after a punishing day in the field."