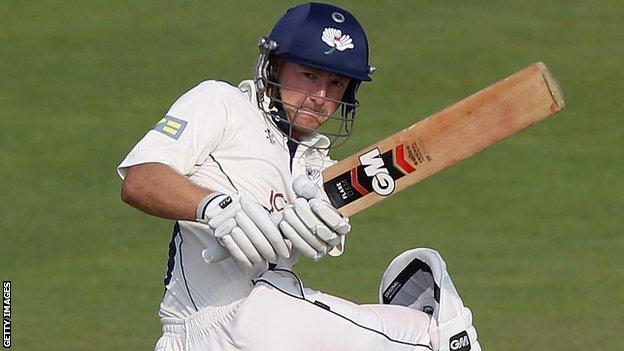 Adam Lyth maintained Yorkshire's push for promotion as he scored 95 on day two against Glamorgan at Headingley.

Yorkshire resumed on 20-0 and Lyth, five not out overnight, fell five runs short of a century while Andrew Gale added 55 and Anthony McGrath scored 39.

The hosts, second in Division Two, gained three crucial batting points before being bowled out for 344.

Jim Allenby took four wickets for Glamorgan, who lost two wickets in two balls late on to end on 27-2 at stumps.

Yorkshire, aiming for an instant return to the top flight after being relegated from Division One in 2011, will begin day three on Thursday 45 runs ahead with Glamorgan only having eight second-innings wickets remaining.

Steven Patterson took two wickets in two balls as he had Nick James caught behind by Andy Hood before then claiming the wicket of John Glover, who was dismissed for a golden duck when he was caught by Lyth.

Earlier in the day, Yorkshire's number nine Ryan Sidebottom scored a quick 35 as the Tykes pushed towards the 350-mark but they narrowly missed out on a fourth batting point by six runs as they lost their last two wickets for four runs.