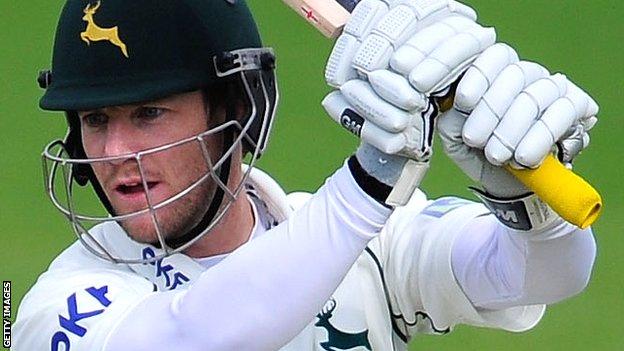 Nottinghamshire captain Chris Read hit his ninth first-class half-century of the season to hold up Surrey.

Read ended on 85 not out and 19-year-old Sam Wood added 45 in his maiden Championship innings as the visitors were all out for 227, 42 behind.

Surrey were earlier dismissed for 269 with Harry Gurney finishing with 4-47 when he got rid of Linley for 14.

"Surrey have an advantage heading into the third day thanks to Linley, but it could have been a bigger cushion were it not for Read. The Notts captain finished undefeated on 85 as the visitors were all out in the last over of the day.

"Linley bowled well, but Stuart Meaker got Surrey going with two quick wickets, including Adam Voges. Wood, in his first Championship innings, looked very assured as he put on 92 with Read.

"Murali Kartik bowled with great control and Linley's season-best means Surrey head into the third day with a priceless 42-run lead in this fascinating contest."

"Despite a battling unbeaten 85 from Chris Read, Nottinghamshire lost their way on the second day, having at one stage been reduced to 60-5.

"Read, with youngster Sam Wood, put on 92 for the sixth wicket, but the lower-order again fell away cheaply and a deficit of 42, on a wearing wicket, may prove significant.

"Notts have remained unbeaten on their travels this season and need to out-perform the home side over the next two days to maintain that proud record and keep themselves in the hunt for the runners-up spot."