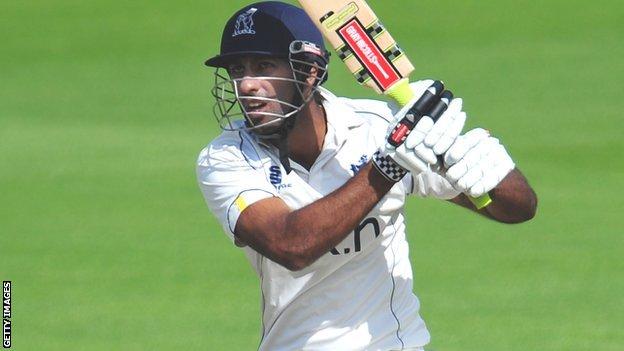 Varun Chopra scored 195 as Warwickshire dominated the second day against Worcestershire and moved closer to winning the County Championship title.

Chopra, 115 not out overnight, passed 1,000 first-class runs for the season, while Ian Blackwell added 84 and Jim Troughton scored 54.

Warwickshire will win the title for the seventh time if they claim a victory in this match and they declared on 471-8.

Worcestershire reached 100-2 with Daryl Mitchell unbeaten on 42 not out.

Warwickshire have won the County Championship six times before.

Warwickshire will resume on Thursday needing to take eight wickets to become county champions for the first time since 2004, while Worcestershire require a further 311 runs just to make their opponents bat again.

If Worcestershire lose, as is expected, they will be relegated to Division Two if Surrey beat Nottinghamshire.

At the start of Wednesday's play, Warwickshire were on 215-2 after they had bowled Worcestershire out for only 60, the lowest score from any team in this year's County Championship and the hosts' worst total against anyone since 1971.

Troughton, 29 not out overnight, reached his fourth championship half-century of the season before he was caught behind by Ben Cox off Chris Russell's bowling.

Chopra, who made 228 against Worcestershire in April 2011, reached the 1,000-run landmark for the second successive season but fell five runs short of a double century when he was bowled by Joe Leach.

Warwickshire's Keith Barker took five wickets on Tuesday and added 40 off 36 balls on Wednesday before taking the vital wicket of key Worcestershire batsman Phil Hughes, who fell without scoring.

"The championship winning post is within sight and surely the Bears are going to get there this time.

"The coach Ashley Giles and captain Jim Troughton have both admitted to sleepless nights as they chase the coveted prize but with two days left in this game and, just eight wickets needed, a repeat of last season's final-day heartache inflicted by Hampshire's resistance seems unlikely.

"The second day's play lacked the drama of the first but it's been typical of Warwickshire's approach this season that they set about their task with measured efficiency.

"Varun Chopra led the way with 195 during which he maintained the same steady pace throughout.

"Whatever sort of night Troughton and Giles endure they should be able to celebrate soon, but not too much, as there's a Lords final to prepare for."