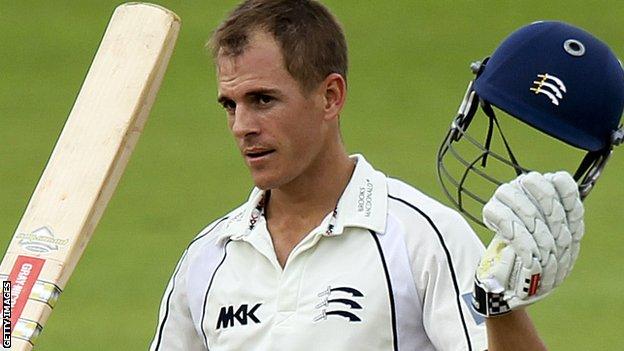 Glen Chapple (2-60) took the wicket of Chris Rogers with the fifth ball of the day as the hosts stuttered to 39-3.

"Despite the early losses, Middlesex finished in by far the stronger position of the two teams. It appeared a crucial toss to win at 39-3 and even when the fourth wicket fell just before lunch.

"But the hosts won the afternoon and evening sessions with a fine comeback with the bat. Neil Dexter had some luck for his century but appears to be back to his best after a slow year with the bat.

"The pressure now heaps on to Lancashire, who are in desperate need of a win, to wrap up this innings in the morning and trying to wrestle back control of the game."

"Lancashire captain Glen Chapple described the opening day as one of the toughest of the season and no wonder.

"The Red Rose were able to make the most of winning the toss by reducing Middlesex to 164-5 at one stage and it was a morning session which belonged to the defending county champions.

"Sadly, the pitch flattened out and the home side, led by Neil Dexter and Gareth Berg, capitalised to leave Lancashire chasing leather for the majority of the afternoon.

"Lancashire are going to need to bat big to get something from this game now."