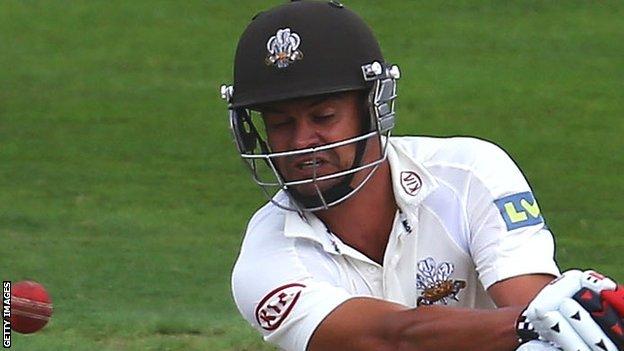 Zander de Bruyn and Gary Wilson scored half-centuries to rescue Surrey on day one against Nottinghamshire.

With Warwickshire already looking against relegation-threatened Worcestershire, it appears Notts' title hopes are all but over.

Surrey, whose relegation worries were boosted by the New Road news, slipped to 83-5 with Harry Gurney (3-47) taking the wicket of Kevin Pietersen for 15.

"Surrey were grateful to a sixth-wicket stand of 123 between de Bruyn and Wilson on the opening day.

"The pair batted very well, rebuilding the innings at a critical time and securing a first batting point for Surrey. But de Bruyn then fell just before the new ball was taken and Wilson soon followed.

"Stuart Meaker and Tim Linley got Surrey through to stumps and they will be looking to find another eight runs in the morning to get Surrey another valuable batting point."

"Surrey reached stumps with the last pair batting through the final seven overs of the day.

"After de Bruyn and Wilson's stand, Notts claimed four wickets for just 36 runs and will feel they took the opening-day spoils.