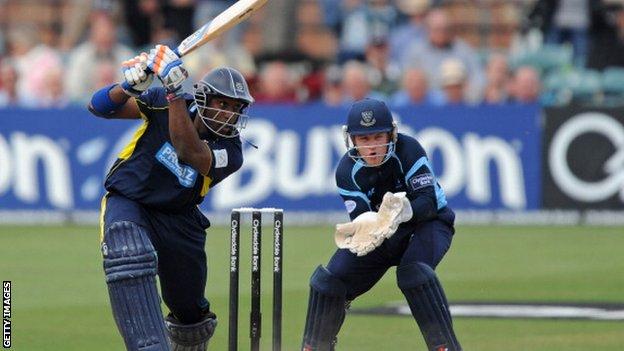 Hampshire stayed on course for a limited overs double despite a second successive CB40 century by Luke Wright.

Jimmy Adams and Simon Katich guided the T20 champions to another final as they made 222-2 to win by eight wickets.

They will face Warwickshire in the final at Lord's on 15 September.

Such a straightforward victory appeared unlikely at the start of play as Wright and Chris Nash (26) set Sussex on their way with an aggressive 71-run partnership.

Matt Prior (28) helped Wright take the score to 159-1 but when the England wicketkeeper was bowled by Chris Wood, it heralded a collapse which saw the home side lose seven wickets for 40 runs in the space of seven overs.

Wright, having reached his hundred off 84 balls, could not see it through to the end of the innings as he became the first of Ervine's victims, having struck three sixes and 15 fours.

And once Carberry and Vince got into their stride, it soon became clear that barring some inspired bowling and fielding, Sussex's total would not be enough.

Carberry cleared the rope on five occasions and also hit eight fours, while his partner collected 11 boundaries of his own to leave home skipper Ed Joyce desperate for a breakthrough.

It finally arrived courtesy of leg-spinner Will Beer, who removed the pair in successive overs, but by then the tone was set and Adams (44) and Katich (47) encountered few problems in an unbroken partnership of 92, the latter hitting the final ball of the 33rd over for four to end the match.