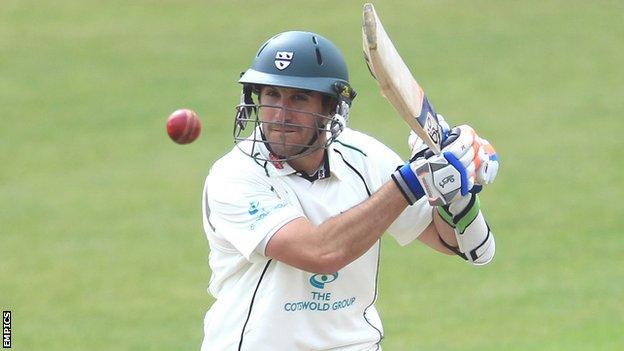 Worcestershire captain Daryl Mitchell carried his bat on the second day at New Road against Middlesex.

Toby Roland-Jones (5-72) had Chris Russell caught by Dawid Malan, before Tim Murtagh bowled Alan Richardson, who had scored a rapid 18 off 11 balls.

Middlesex reached 49-0 in reply at stumps with Sam Robson on 27 not out.

Worcestershire, bottom of Division One, quickly scored the five runs they needed to claim their third batting bonus point when play finally started late in the afternoon.

Mitchell's century was his second of the season, but his first since scoring 102 against Nottinghamshire in the first championship game of the campaign in April.

This was the only game out of eight County Championship matches that saw any play on day two with the other seven matches abandoned without a ball being bowled.

However, another downpour in Worcester ensured only 19.3 overs could be bowled at New Road before the umpires called a halt to the day's action.