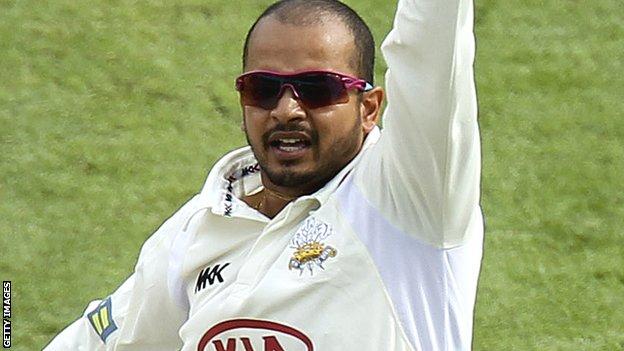 Surrey spinner Murali Kartik sparked controversy on his return to Taunton with the run out of Somerset batsman Alex Barrow.

Kartik, who in the winter ran out Barrow, who was backing up at the non-striker's end.

Surrey captain Gareth Batty upheld the appeal, despite it being queried by umpire Peter Hartley.

Stuart Meaker took 4-75 and Kartik 4-70, and the India spinner backed up his actions for the run out by tweeting: "Everyone get a life please.

"If a batsman is out on a stroll, in spite of being warned, does that count as being in the spirit of the game?

"Then why do wicketkeepers try to run batsman out when they are batting out of the crease to slow seamers to negate their swing. Why the hypocrisy in spirit?"

The Taunton crowd were heard booing as Barrow left the field following his dismissal and they also expressed their dissatisfaction before and after tea.

"It is one of those laws of cricket that you generally don't uphold, Adams said.

"But following what he [Batty] believed at the time was right, I have to support him in that, and I do.

"If we've breached, and clearly we have breached the spirit of cricket today, then we thoroughly apologise for that."

Former Somerset and Gloucestershire wicketkeeper Steve Snell, who was in the crowd at Taunton, told BBC Radio Bristol: "I've never seen anything like it in my nine years in the professional game.

"Kartik was very well respected at Somerset - he was a very good cricketer - and Alex Barrow is the nicest of players.

"It's really bad sportsmanship and I'm shocked by it, if I'm honest.

"He was acting within the laws of the game but it's an unwritten rule that you just don't do it - especially in the four-day game.

"I know there was some ill feeling. I can't see how he isn't embarrassed when he looks at what he's done.

"As a cricketer, you wouldn't think about doing it. It's going to create a really bad feeling for him."