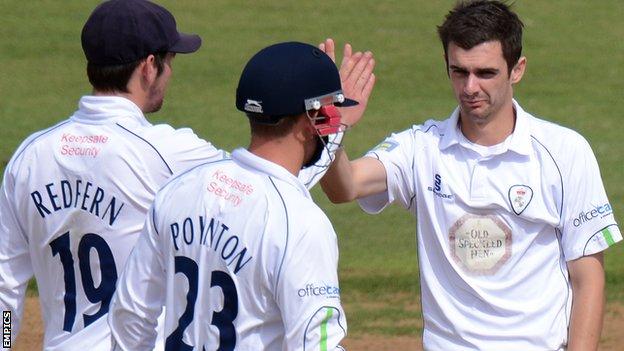 Essex fought back with three quick wickets after Derbyshire took another step towards promotion by bowling them out for 245 on day one at Derby.

Wayne Madsen's decision to bowl first paid off as David Wainwright took 4-64 to help dismiss Essex in the 79th over.

Graham Napier top-scored with 42, adding 74 for the eighth wicket with David Masters (35).

Masters then removed Madsen and Usman Khawaja while Napier had Tony Palladino lbw as Derbyshire made 28-3 in reply.

Starting the match with 28 points to make up on second-placed Hampshire, Essex had veteran seamer Masters back after a side strain but the loss of Harbhajan Singh because of international commitments with India meant they also brought in leg-spinner Tom Craddock.

Having been put in, however, their batting was unconvincing after in-form openers Tom Westley and Jaik Mickleburgh departed for 14 and five respectively.

They could ill afford the needless loss of captain James Foster, who was dropped by keeper Tom Poynton but then attempted a suicidal single on 31 and was run out by Madsen's direct hit.

From 151-7, Napier and Masters batted sensibly to prolong the innings and they further revived their side's chances with the ball when Derbyshire began their reply.

Madsen was bowled for two and Australian Khawaja went for a duck when he edged to Westley at second slip, prompting Derbyshire to send in Palladino as night-watchman against his old club, but he only lasted 10 balls before being trapped in front in the penultimate over.