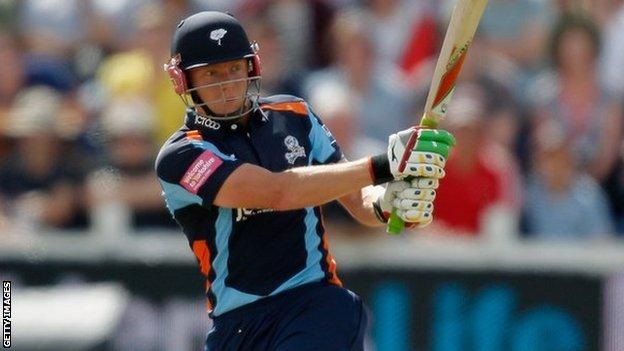 A half century from England batsman Jonny Bairstow helped Yorkshire defeat Sussex in Cardiff to reach the FL t20 final for the first time.

Bairstow (68 not out) and David Miller (47) guided the Tykes to 172-6 as they recovered from 36-3, after Sussex's Scott Styris had claimed three wickets.

The win ensures Yorkshire have secured their place in the qualifying stages of the 2012 Champions League in October.

Yorkshire had received an early boost as Tim Bresnan, whose participation in finals day had looked in doubt, received late clearance from the England & Wales Cricket Board to play after England's one-day international against South Africa on Friday was abandoned because of rain.

The Tykes won the toss and elected to bat but made a poor start at the Swalec Stadium.

Both finalists will take part in the qualifying phase of the 2012 Champions League Twenty20 in South Africa from 9-11 October. If successful, they will then join the best Twenty20 teams from Australia, South Africa and India in the main competition from 13-28 October

Captain Andrew Gale was dismissed in the second over when he was caught by Nash at mid-on before Phil Jaques was bowled two overs later.

Both wickets fell to Styris, who had hit the joint-third fastest Twenty20 century in Sussex's quarter-final win against Gloucestershire, to help his side reach finals day.

Styris then struck again shortly after when he trapped Joe Root lbw after the batsman had missed with an attempted reverse sweep off a full toss.

However, Yorkshire, who have not won any silverware since claiming the C&G Trophy in 2002, were rescued by a partnership of 82 for the fourth wicket between Bairstow and Miller.

In reply, Sussex, the 2009 T20 winners, struggled to recover after losing the key wickets of England pair Luke Wright and Matt Prior inside the first three overs.

Opener Nash hit his third half century of this year's tournament but the Sharks regularly lost wickets as their hopes of a second T20 success in four seasons vanished.

Only Nash reached 20, with seven Sussex batsmen dismissed for a single-figure score.

Gary Ballance took three catches, including that of danger man Styris, who was dismissed for only eight, before Michael Yardy and Will Beer were both run out late on as Yorkshire sealed a comfortable win.