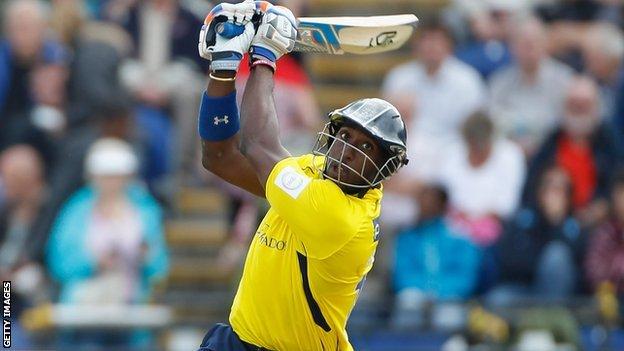 Hampshire reached the final of the FL t20 for the second time in three years as they defeated Somerset by six wickets in Cardiff.

Somerset, losing finalists for the last three years, were restricted to 125-6 off their 20 overs, despite Craig Kieswetter's unbeaten 63.

Sean Ervine top scored with 34 not out, while Michael Carberry added 33.

The victory ensures Hampshire will take part in the qualifying phase of the 2012 Champions League Twenty20 in South Africa in October.

It will be Hampshire's first appearance in that competition as no English sides played in 2010, because of a clash with the end of the County Championship.

This is the third successive year where Hampshire and Somerset have played each other on Twenty20 finals day. Hampshire won in the 2010 final, while Somerset secured a victory in the 2011 semi-finals

Hampshire elected to field and Dimitri Mascarenhas had Richard Levi caught at mid-on by Simon Katich before dismissing Somerset skipper Marcus Trescothick, who chopped the ball back on to his stumps.

Mascarenhas only conceded 11 runs from his four overs as Somerset made a slow start. They then lost James Hildreth, bowled after missing an attempted sweep, and Jos Buttler, who also played on to Ervine's medium pace.

Peter Trego was lucky to survive as he misjudged a shot but watched the ball land between Mascarenhas and James Vince, although Trego was then out to the next delivery he faced, trapped lbw by Ervine (2-22) with Somerset on 58-5.

Kieswetter made his highest T20 score of the season, although he was lucky to survive on two occasions.

Firstly, wicketkeeper Michael Bates missed a potential stumping chance when the batsman was on 16, and Kieswetter was then dropped by Simon Katich when on 54.

Hampshire showed their desire to reach their target quickly with opener Carberry hitting three boundaries in the first four balls of their innings.

They had reached 33-0 when Buttler produced a stunning diving catch at mid-wicket to dismiss Jimmy Adams.

With such a small total to defend, Somerset's fielding had to be good if they were to have any chance, and Kieswetter and Trego combined to run out Carberry after a mix-up with batting partner Neil McKenzie.

Hampshire still needed 32 to win off the last four overs as Somerset could sense victory, but left-handers Ervine and Katich (32 not out) guided Hampshire home with six balls to spare.

"The experienced guys have won us the game and we're very lucky to have some seriously good players.

"It was a good all-round bowling performance and everyone knows their roles in the team. We gave too many runs away at the end but that can happen.

"But to restrict a class side like Somerset to 125 is a great effort.

"It's a funny game, Twenty20, and it's never over until it's over so until the final run was scored I wasn't going to crack a smile."

"It's a dreadful feeling. You put so much effort in, so much blood, sweat and tears but at least we keep putting ourselves in the position to be shot down.

"We will continue to do the hard work and we will get it right.

"We have based our club on a lot of hard work and we're good at what we do, but we just need to get a bit better.

"On the day we were just not good enough and we were outplayed by the better side.

"They strangled us at the top of the order and we got off to a bad start and only Craig (Kieswetter) got to grips with the pitch."