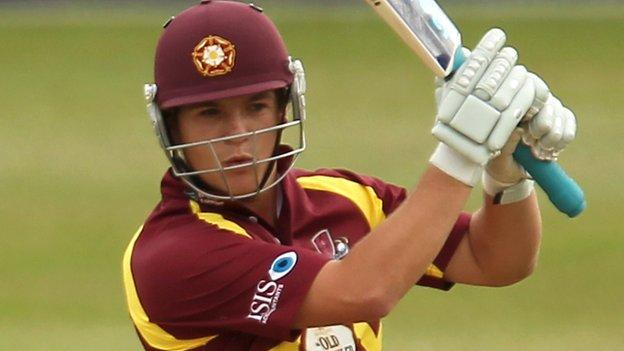 Rob Newton hit his second century of the match to help Northants play out a draw with Division Two leaders Derbyshire at Wantage Road.

Derbyshire's ninth-wicket pair failed in their bid to establish a new first-class record when Tom Poynton went for 106 with only two runs added.

They put an unbroken 175 for the fifth wicket after Northants had wobbled briefly on 37-4, Tony Palladino claiming two wickets.

Tim Groenewald was the first to strike, coming on top of his belligerent 42 off 29 balls to round off the Derbyshire innings.

Madsen might have missed out on rewriting the history books as he and Poynton chased the oldest partnership record in first-class cricket.

But there have been only two higher individual knocks in Championship cricket this season, from Madsen's fellow South African Kevin Pietersen (234) and Yorkshire's Adam Lyth (248).

And the Derbyshire captain's 261-run stand with Poynton, in which both achieved career bests, is still the third highest ninth-wicket partnership in the history of first-class cricket.

The all-time record still belongs to two Derbyshire batsmen, Arnold Warren and John Chapman, who put on 283 at the Miners Welfare Ground, Blackwell against Warwickshire in 2010.