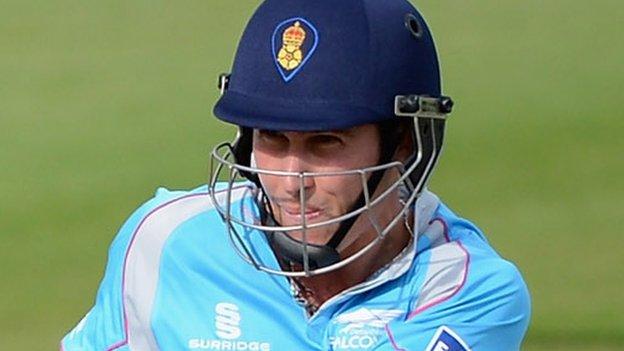 Resuming on 163-5 at Wantage Road, the Division Two leaders still needed another 88 to avoid the follow-on.

But Madsen batted throughout the day to make an unbeaten 223 out of 512-8.

Having passed the follow-on, he then put on an unbroken 259 with Poynton (105no), to close 24 shy of the world ninth-wicket record, set 102 years ago.

The current record of 283 was set by two Derbyshire batsmen, Arnold Warren and John Chapman at the Miners Welfare Ground, Blackwell in June 1910.

But Madsen and Poynton's efforts have already elevated them to the third-highest ninth-wicket stand in the history of first-class cricket.

Staffordshire-born Poynton's century was the first time that the 22-year-old had reached three figures, comfortably surpassing his maiden half-century against Essex in May.

Derbyshire now lead by 112 going into the final day, having seriously harmed Northants' outside chance of promotion.

Having immediately lost overnight partner Ross Whitely, Madsen, 37 at the start of play, was well supported in stands of 43 for the seventh wicket with David Wainwright and another 46 with Jonathan Clare.

Ironically, his previous career best came on the same ground, this double century bettering his 179 against Northants in 2010.