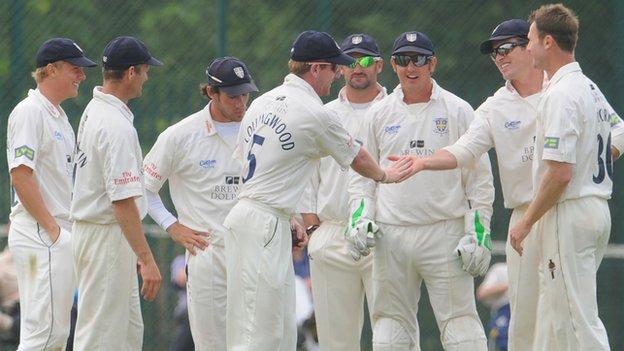 Durham closed out their fourth straight County Championship victory to leave Worcestershire in even greater danger of relegation from Division One.

Resuming on 3-1, chasing 151 to win, the hosts' pursuit suffered an alarming early wobble at Chester-le-Street.

But captain Paul Collingwood (53no) combined with former skipper Dale Benkenstein (62no) to reach 154-4 and see their side to a six-wicket win.

I would not put the turnaround down to me taking over as captain. I'm just delighted for the players to get four victories under our belts

After Keaton Jennings was bowled through the gate for the second time in the match, the game was held up by a 10-minute rain break.

And, when they resumed, it seemed as if Durham might be worried about further rain, Mark Stoneman taking three fours off Chris Russell in the next over.

Back foot shots either side of the wicket were followed by a square drive, then Stokes drove Richardson to the extra cover boundary.

Stokes fell leg before when he tried to pull a ball which was too full for the shot and, when Stoneman was out LBW, there was concern in home ranks.

But experience proved vital, 36-year-old Collingwood coming in to join 38-year-old Benkenstein, and, between them, the pair put on a unbroken 119-run partnership to all but seal Durham's safety.

No small achievement for the back-to-back 2008 and 2009 champions, who looked doomed less than a month ago.

"They put us under pressure. Alan Richardson is a very good bowler and was nipping the ball about.

"When I went out there I admit I was a little bit nervous because it's not easy scoring runs in first-class cricket.

"However, the pitch did flatten out and, once me and Benky took the heat out of the situation we were pretty comfortable in the end. He is a great player to bat with because he is so relaxed and experienced.

"I would not put the turnaround down to me taking over as captain. I'm just delighted for the players. We're playing some great cricket at times and turning some great form into wins."

"We've certainly not given up any hope but we'll have a good couple of days to lick our wounds.

"Then it will be back in to practice and we'll go hard again at Middlesex.

"There is no reason why we can't win three out of three although it is going to be tough, there's no denying that.

"But I don't think we can give up hope just yet, as there's still a lot of cricket to play."

"A month ago Durham were bowled out here for 102 in their first innings against Middlesex. The mood was black. They had not won a four-day game in 10 attempts and, at the time, it looked like it was going to be 11.

"That evening I held a members' forum here, attended by coach Geoff Cook and new captain Paul Collingwood. Despite events on the pitch the mood was upbeat. The two told supporters to keep the faith and said one win could change their season and that is exactly what happened.

"They fought back to win that Middlesex match and have now equalled the county record of four Championship wins in a row.

"I have to admit I never saw it coming and I don't think anyone else did either. But all credit to the players. They had their backs to the wall and were staring into the abyss. But they've turned it around in style and deserve the praise they're now getting."