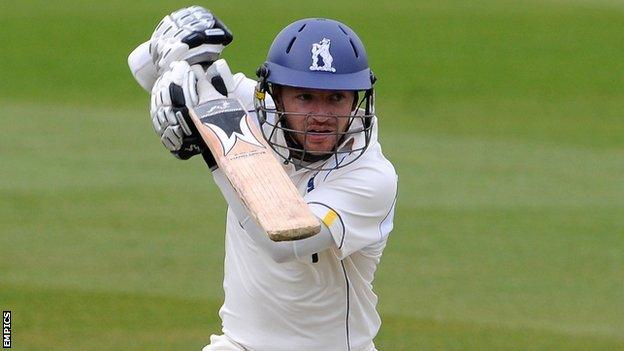 Warwickshire opener Ian Westwood again showed a liking for the Middlesex attack by scoring his second century against them inside three weeks.

After his 111 at Uxbridge on 3 August, Westwood this time weighed in with 120 as title-chasing Warwickshire edged a first-innings lead at Edgbaston.

But they were surprisingly knocked off course after reaching 175 with openers Westwood and Chopra still unparted,

Up to then it had been former Bears skipper Westwood's day.

If his first ton of the summer at Uxbridge was attritional (taking blows on the head, finger, ribs, thigh and thumb), here he was able to enjoy a more relaxed passage.

Over his career the 30-year-old left hander has developed a reputation as a gritty operator, but he was this time in a refreshingly positive mood, pinging his shots around the ground, particularly in a 15-minute period after lunch.

"Middlesex fought back with the new ball to keep the match in the balance despite struggling for most of the day.

"Warwickshire cruised to 175 without loss and will be massively disappointed not to have moved into an unassailable position.

"The hosts will know they gave away cheap wickets with loose shots just prior to the second new ball, which appeared to offer more to Middlesex, Toby Roland-Jones cashing in with three wickets.

"The harder ball is crucial on this pitch, and Warwickshire can still scramble a useful first innings advantage with the last two wickets to then put pressure on the Middlesex openers."