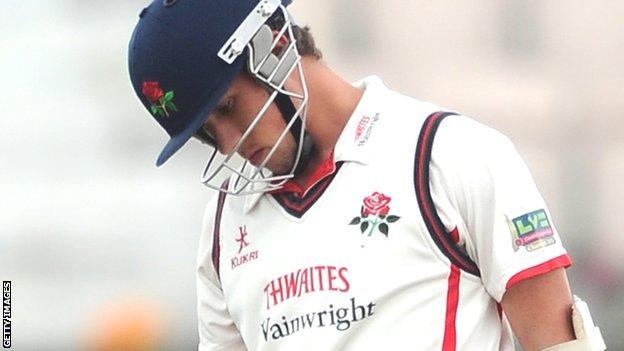 Lancashire slipped closer to relegation after being restricted to only one batting point on the final day of their match against Worcestershire.

After two rain-ruined days, the match was always heading for a draw but Lancashire, the 2011 champions, had the chance to claim some vital points.

Worcestershire reached 33-0 from 14 overs in their second innings.

Gareth Cross top scored for Lancashire with 39 and he was the only visiting player to reach 30.

Both Lancashire and Worcestershire, who have only won one Championship game apiece all season, now need to win at least twice in the next month to avoid relegation.

Their hopes were not helped by results elsewhere as fellow strugglers Surrey and Durham both claimed crucial victories against Middlesex and Nottinghamshire respectively.

Lancashire remain eighth, three points ahead of bottom side Worcestershire but 15 points behind Surrey in seventh.