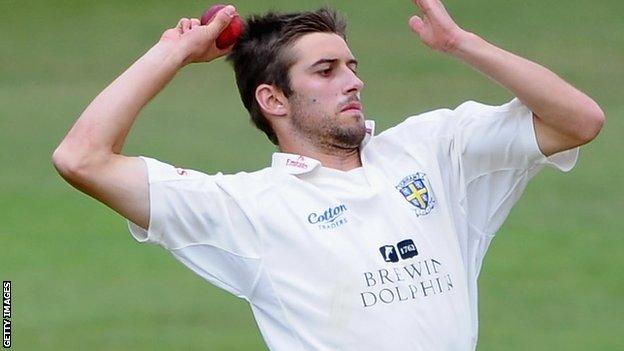 Nottinghamshire's hopes of winning the County Championship Division One title were hit as they suffered a 16-run defeat against Durham at Trent Bridge.

Nottinghamshire looked on course to reach that total as openers Alex Hales (101) and Riki Wessels (98) put on 168 for the first wicket.

Wood, 22, was playing in only his second Championship game of the season and claimed the first five-wicket haul of his career.

After the wickets of Wessels and Hales, Nottinghamshire's hopes had rested on Steven Mullaney, who was left stranded on 60 not out.

He eventually ran out of partners as Fletcher and Carter's wickets both came in the space of three balls.

Nottinghamshire, the 2010 county champions, have three matches remaining and are 18 points behind leaders Warwickshire, who have also played a game less.

Durham, meanwhile, have opened up a 20-point gap between themselves and second-from-bottom Lancashire to boost their hopes of survival.