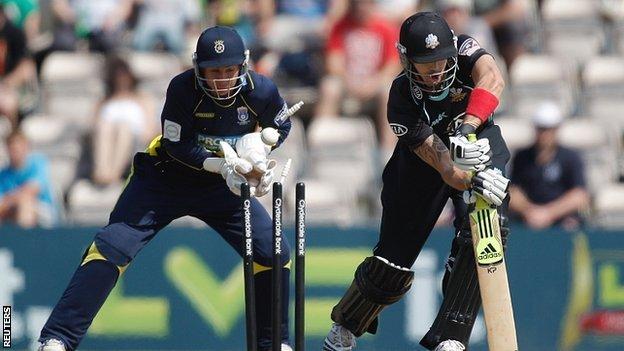 Kevin Pietersen was out for a golden duck in his first appearance since being dropped by England, as Surrey lost to Hampshire in the CB40.

Playing against his old club Hampshire at the Ageas Bowl, Pietersen was bowled by left-arm spinner Liam Dawson.

The beleaguered batsman was left out of the team for the Lord's Test against South Africa following unrest in the England dressing room.

"It was a good ball that got Pietersen, pitching middle-and-leg and hitting off stump," said BBC Sport's Steve May.

"But it was greeted as though Southampton had won the Champions League and the FA Cup at the same time - 50- and 60-year-old people standing up and cheering with their arms in the air."

Pietersen, 32, left Hampshire in acrimonious circumstances in 2010 having played rarely for them after breaking into the England Test team in 2005.

In his last appearance for Surrey, Pietersen scored 234 not out in a drawn County Championship match against Lancashire on 11 July.