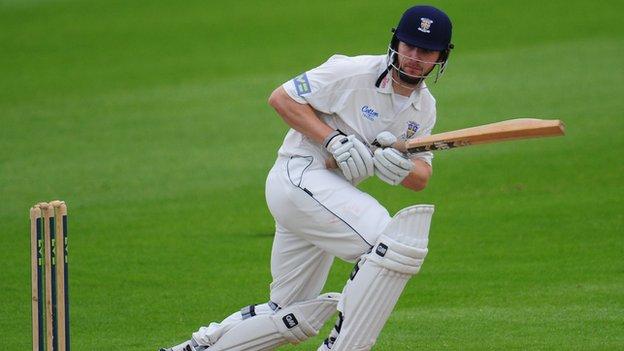 Mark Stoneman hit his first County Championship century of the summer to help much-improved Durham into a strong position against title-chasing Nottinghamshire at Trent Bridge.

Opener Stoneman made an impressive 114, well supported by an unbeaten 51 from visiting skipper Paul Collingwood.

Home paceman Luke Fletcher finished with 3-47 for the labouring hosts.

Nottinghamshire now have to quickly take the final three Durham wickets on the final morning if they are to stand any chance of knocking off the runs and maintaining the pressure on Championship leaders Warwickshire.

And, having looked certainties for the drop a month ago, that would go a long way to ending their relegation fears.

"A tough day at the office for the Notts attack, with the weather being kind for once.

"Despite the poor forecast, they managed 86 overs and Durham made the most of it, particularly Mark Stoneman who batted beautifully for his fourth career ton.

"Notts' unbeaten run this season is very much under threat, particularly with Graham Onions looking to build on his first innings exploits."