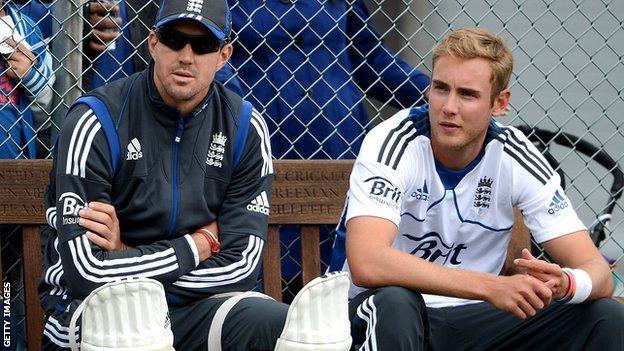 Pietersen, 32, is alleged to have become frustrated with the unflattering tweets, a complaint apparently aired during his recent dispute with the England and Wales Cricket Board (ECB).

Tweeter Richard Bailey, whose account is followed by some England players, claimed to be behind the parody.

England Twenty20 captain Broad said: "I had no involvement in this whatsoever."

Earlier this month the Twitter account, KP Genius, was closed after it was rumoured Pietersen was under the impression that fellow England players were writing the tweets.

It was also alleged he was unhappy that some of his colleagues were following the account and interacting with the owner.

On Wednesday, a statement from the ECB quoted 26-year-old Broad as denying any involvement.

"I did not play any role in the creation of this account or provide Mr Bailey with any information regarding Kevin Pietersen or the England team," he said.

"Mr Bailey is a friend of mine, but we had no conversations regarding this issue at all and I am pleased that he has now decided to close the parody account down."

This week, a tweet by Bailey announced: "Yes the parody was me. It was for humour purposes only and as soon as I realised it was upsetting people I took it down."

"People who say Test cricket is the pinnacle haven't played IPL in front 80,000, slapping Indian medium pacers about at a 141% strike rate." (7 August)

"Note to ex-pros. Make sure you're better than KP before you have a pop. Which means unless you're Don Bradman, keep your mouth shut." (30 July)

Further tweets from Bailey's account, which was followed by Broad, Matt Prior, Tim Bresnan and James Taylor, said: "No professional cricketers were involved in it. I apologise if I upset anyone."

ECB Managing Director Hugh Morris added to Broad's statement: "Having discussed this matter with Stuart, I am fully satisfied that he acted in a professional manner at all times and did not breach any confidences regarding fellow England players."

Pietersen has not been selected to play for England in the third and final Test of the home series against South Africa, which starts on Thursday.

His omission from the England squad came at the end of a turbulent week in which he first hinted that he could retire completely from international cricket, only to back down on Saturday and commit to playing for England in all forms of the game.

However, the ECB wanted assurances from Pietersen that he had not sent derogatory texts about Strauss, which Pietersen was unable to provide.