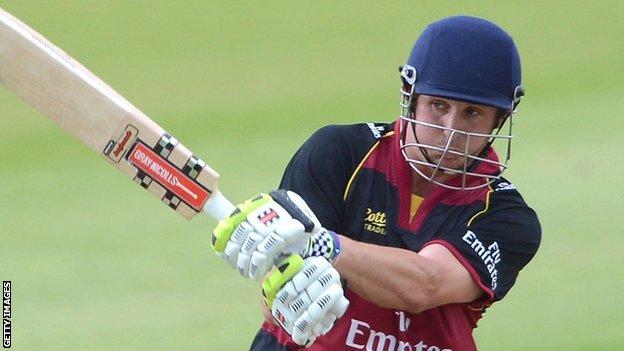 Phil Mustard hit his second century in as many days to inspire Durham to a 59-run Clydesdale Bank 40 Group B win over the Welsh Dragons at Chester-le-Street.

Mustard took up where he left off in his 143 against Surrey, hitting 107 from 61 balls.

Fellow opener Mark Stoneman top-scored with 112, while Gordon Muchall chipped in with 75 as Durham amassed 307-2.

Despite a battling 105 from Mark Wallace, Dragons wickets fell regularly and they were all out for 248.

Wallace put on 117 in 17 overs for the fourth wicket with Marcus North before driving Chris Rushworth to extra cover with the score on 207 in the 28th over.

Four overs later North holed out to long-on off Gareth Breese for 59, leaving the rest with too much to do.

In their frantic chase the Dragons threw wickets away, the remaining five going down for 20 runs.

Breese was the pick of Durham's bowlers with 4-50 while Scott Borthwick and Rushworth also picked up two wickets apiece.

The two wins lifted Durham from next to bottom in their group to third place with two games left, while Glamorgan's hopes in sixth are over.