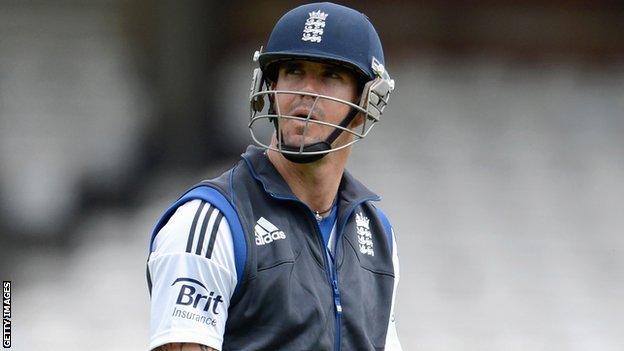 Kevin Pietersen has been dropped for England's third Test against South Africa over reports he sent derogatory text messages about his team-mates.

On Saturday, Pietersen removed his threat to retire but the England and Wales Cricket Board wanted confirmation he had not texted Proteas players.

"This has not been forthcoming despite timelines being set," said England cricket managing director Hugh Morris.

In a statement, Pietersen said: "To say I am gutted is an understatement."

Pietersen's omission comes at the end of a turbulent week which began with him hinting that he could retire after the third Test, before renewing his commitment to the England team in a video released via YouTube on Saturday.

The announcement of the squad for the third Test, which England must win to avoid being replaced by South Africa at the top of the Test rankings, was delayed by five hours and, when it came, Pietersen's was left out at the expense of Yorkshire's Jonny Bairstow.

Morris added: "In the best interest of the team, he will miss the Lord's Test.

"During the past week we have held several discussions with Kevin Pietersen and his advisors.

"This shows how disenfranchised Pietersen is within the set-up and how aggrieved the ECB is over his comments about team spirit and even more so about reports he sent text messages to South Africa players during the Headingley Test."

"Following a constructive meeting it was agreed that a number of actions needed to be completed to re-engage Kevin within the England dressing room.

"A fundamental item was to confirm publicly that no derogatory texts had been sent by Kevin to the South African team.

"We provided an additional six hours this morning to provide every opportunity for agreement to be reached but regrettably this has not been possible."

Pietersen's statment, released after the squad announcement, said: "Naturally, I am hugely disappointed that the ECB have decided not to select me. To say I am gutted is an understatement.

"I had an emotional time at Headingley and the video I released was my way to bring closure to the issues I had at that time. I stand by every word I said in the video.

"The fact is: I love England and I love cricket. This entire episode has been demoralising for me and my family. However, none of this constitutes the end of my career as an international cricketer.

"I wish the team - and Andrew Strauss [in his 100th Test] in particular - every success next week."

South Africa, who lead the three-Test series 1-0, drew with Derbyshire in what proved to be their final tour match before the final Test.