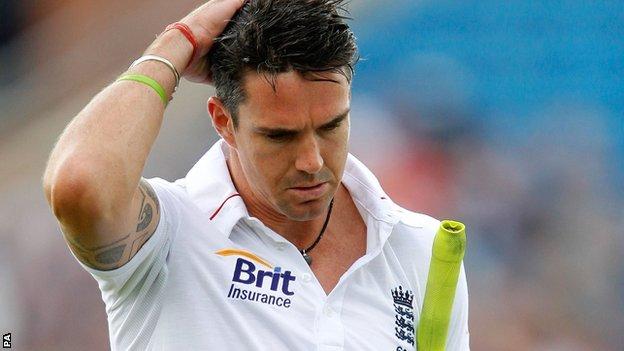 Kevin Pietersen says he is committed to playing for England in all forms of cricket, effectively reversing his decision to quit limited-overs internationals.

The 32-year-old batsman had even hinted last week that the upcoming third and final Test against South Africa could be his last.

"I've been through a very difficult period," Pietersen admitted.

He talked about a "change of heart", adding: "I love winning for England."

I won't be playing the full IPL next year - I will come back and play the Test matches against New Zealand, so the IPL isn't an elephant in the room any more

Pietersen said in a video interview, conducted by his management company, that he wanted to give "confirmation and clarity" about his future after speaking to his family, advisors and close friends.

He said he was returning "unconditionally" to one-day and Twenty20 internationals. He also explained that, contrary to recent reports, he was not insisting on playing the full Indian Premier League (IPL) season next year, which would mean missing Test matches.

"I'm not going anywhere," he said. "I want to make myself available for selection for every single form of cricket for England.

"Money's not everything to me. Sportsmen have short careers. I can't do this until I'm 50 or 55 and I'm a provider for a young family.

"But I love winning for England. I can't wait to play in Straussy's [skipper Andrew Strauss's] 100th Test next week.

"These things make me happy - the runs I scored at Headingley last week, in a draw, didn't mean as much as a hundred I scored in Sri Lanka six months ago which ended in an England victory.

"I've had a change of heart because of those reasons."

After his hints at imminent Test retirement, speculation had been mounting that there was even a question mark over Pietersen's participation in the third and final Test at Lord's, for which the England squad will be announced at 14:30 BST on Sunday.

The "Pietersen issue" has been in sharp focus ever since he walked off the pitch at Headingley last Monday.

After telling the BBC's Test Match Special that he could not give any assurances that the Lord's Test would be his final appearance in Test cricket, he then went into the post-match news conference and claimed he had issues within the dressing-room and with the England and Wales Cricket Board (ECB).

It then emerged the Surrey player was unhappy with a Twitter account, "KP Genius", which parodied him and has been subsequently closed.

Pietersen has now conceded he "didn't handle the press conference well at all".

He explained: "I was very emotional. I am who I am in terms of shooting from the hip occasionally, and I do make mistakes.

"I had a really, really good long chat to a team-mate yesterday. We went through loads of different things and I actually finished that conversation as someone who cannot wait to meet with the team on Tuesday."

On the IPL, he added: "I've had a very constructive conversation with the owner of the Delhi Daredevils franchise and they've been magnificent.

"I won't be playing the full IPL. I will come back and play the Test matches against New Zealand next year, so the IPL isn't an elephant in the room any more."

This Test, which starts on Thursday, is arguably England's biggest match of the year so far, as the hosts must win to draw the series 1-1 and prevent the Proteas from overtaking them as the number one Test side in the International Cricket Council's world rankings.