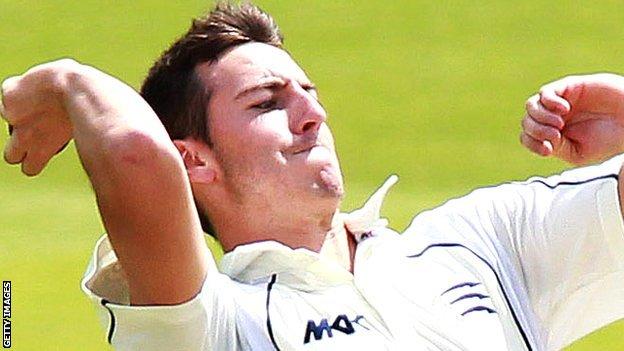 Career-best figures from Toby Roland-Jones hauled Middlesex back into their Championship game with Sussex at Hove.

Roland-Jones took 6-66 for the fourth five-wicket haul of his career.

Middlesex still have plenty of work to do and closed on 92-2 in their second innings, still 25 runs behind, with Chris Rogers making 48.

Joe Denly, who has only past 30 once in his last nine Championship innings, played on to Magoffin for eight.

And things could have been even better for Sussex, but night-watchman Roland-Jones was dropped at short leg in the penultimate over.

"Advantage Sussex, but only just, at the end of an absorbing second day at Hove where victory would take them into second place in the County Championship.

"Earlier in the day, Michael Yardy had showed that with concentration and sound technique the pitch held few terrors, and the invaluable Sussex lead of 117 owed much to his innings.

"Initially, the Middlesex top order looked to have taken a leaf from Yardy's book but, with Monty Panesar starting to weave his magic, Sussex are in a good position to complete a fifth Championship win of the season."