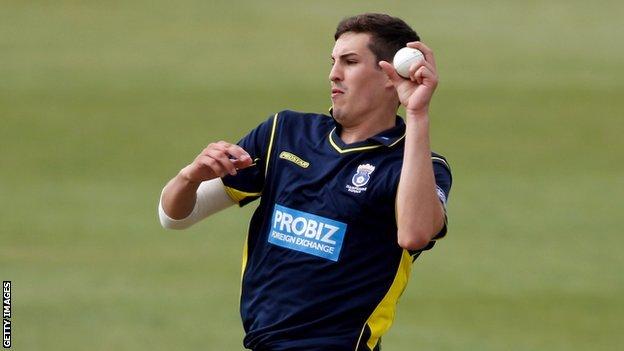 Hampshire went to the top of Clydesdale Bank 40 Group B after Neil McKenzie produced a brilliant innings in their 107-run win over the Welsh Dragons.

McKenzie's 88 from 89 balls helped the Royals, who lost the toss, towards 226 all out at the Swalec Stadium, Cardiff.

The hosts could only make 120 all out with 7.1 overs remaining, ending their realistic hopes of reaching the semis.

Hampshire had reached 27 for nought in four overs but were pegged back by Glamorgan with two wickets as Jimmy Adams and Simon Katich fell cheaply.

James Vince looked certain to go to his 50 but was run out by wicketkeeper Mark Wallace two runs short of the target, leaving the visitors 78 for three in the 14th over.

The exit of Vince and some good bowling especially from Jim Allenby slowed the run rate, although South African Neil McKenzie reached his half-century from 59 balls.

Danny Briggs struck Graham Wagg for two sixes in between losing McKenzie, who holed out off the expensive Simon Jones seven balls from the end of the innings.

The Dragons were not helped by being penalised six runs for not bowling their overs in the time allotted.

They were soon on the back foot in their reply when they were reduced to 21 for three in six overs by Wood.

Wallace was caught mistiming a pull, Chris Cooke was well caught at short midwicket and Gareth Rees was bowled.

Allenby and Marcus North did their best to get the hosts back on course but David Griffiths had North caught behind attempting to drive, leaving the Dragons 47 for four after 14 overs.

It did not get better for the home side as Allenby was well caught by Vince on the long-on boundary off Briggs, leaving them 58 for five in the 18th over.

Wood returned to bowl Cosker and Jones with consecutive balls as Glamorgan subsided.