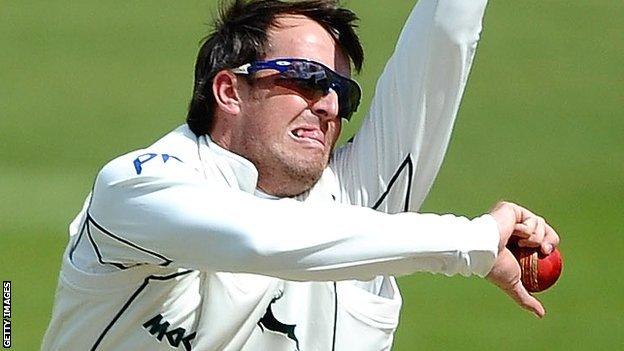 Somerset and Nottinghamshire had to settle for a draw, handing an advantage to Championship leaders Warwickshire.

and are now 21 points clear of Notts, with Somerset a further 11 points behind.

England spinner Graeme Swann took 3-62 as the visitors added 62 to their overnight total and were all out for 249, James Hildreth making 83.

The captains shook hands on a draw after Notts overcame a 93-run deficit to reach 176-5, Alex Hales making 54.

James Taylor, who made his England Test debut in last week's second Test with South Africa, hit seven fours and a six in a 67-ball innings of 46.

Notts did stumble as the game began to drift to a draw as they slipped from 118-2 to 167-5, before Adam Voges and Paul Franks played out until close.

Peter Trego (2-45) and Lewis Gregory (2-22) led the way for Somerset, while Steve Kirby took the other wicket to fall.

Somerset take seven points from the game and Notts six, but this result suits neither side with Warwickshire's victory inside three days giving them the advantage with four games to go in the season.

Notts have a home match with Durham and a trip to Surrey to come, as well as two massive fixtures against Warwickshire, including the Trent Bridge clash in the last week of the season.

Somerset still have to play Sussex home and away and will also host Surrey and Worcestershire.

"Under normal circumstances a draw at Taunton is a creditable result but Warwickshire now have a substantial lead over Notts.

"A poor toss to lose, coupled with two days of rain, meant that Chris Read and his side were always up against it.

"But a return to form for Alex Hales bodes well for the important fixtures to come."