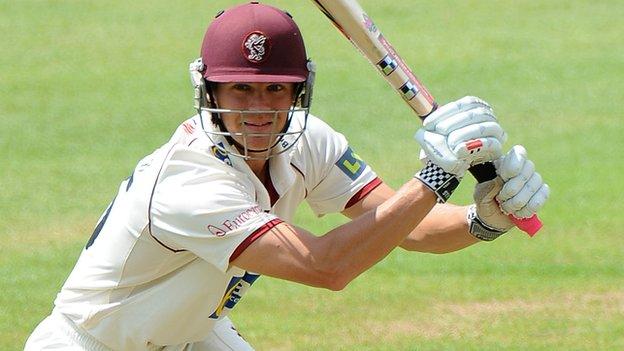 County Championship title hopefuls Nottinghamshire and Somerset appear to be heading for a draw as 13 wickets fell on day three at Taunton.

After rain wiped out much of the first two days, Notts resumed on 48-3.

But, despite Chris Read hitting 52, the visitors were dismissed for 156 as Gemaal Hussain took 4-29.

Somerset fared little better and were grateful to James Hildreth's 63 not out as they closed on 187-6, England spinner Graeme Swann taking one wicket.

However, Nottinghamshire were not helped by the absence of their most effective bowler Andrew Adams with a tweaked hamstring, and the loss of left-arm paceman Harry Gurney to a leg injury.

To make matter worse for Notts, Adams dropped Hildreth at midwicket off Swann, who later removed Peter Trego, when he was only on 16.

The visitors had been lifted by the capture of Marcus Trescothick for a second ball duck, although the Somerset captain had earlier taken five catches at second slip to equal the county record for an outfielder.

After play got under way on time for the first time in the match, Notts lost Adam Voges in the second over - the first of six wickets to fall before lunch - on the way to being bowled out 15 minutes into the afternoon session.