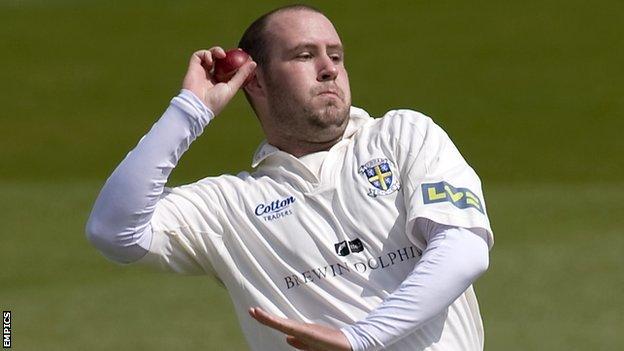 Durham climbed out of the County Championship relegation zone by completing an innings victory over fellow strugglers Surrey.

But Chris Rushworth trapped Tim Linley lbw from the final ball of the day's opening over and from there Surrey subsided to 143 all out.

Durham's win by an innings and 38 runs lifts them above Surrey to sixth in the table, seven points clear of danger.

We were outplayed and thoroughly beaten

To make matters worse for seventh-placed Surrey, they were docked one of the three bonus points they picked up for a slow over rate to drag them closer to the drop zone.

Durham also slipped behind the over rate but they turned to the spin of Scott Borthwick and recovered their deficit as the leg-spinner took the final two wickets to fall.

Beginning the day needing five wickets to complete a second-successive win, the hosts enjoyed the perfect start as Rushworth trapped Linley leg before with an in-swinger.

Graham Onions had opener Rory Burns caught behind nine overs later, and Callum Thorp ended a stand of 23 for the eighth wicket between Gareth Batty and Matthew Spriegel when Spriegel top-edged to a diving Ben Stokes running back from third slip.

Borthwick then had Jon Lewis caught by Paul Collingwood at slip before wrapping up victory when Batty pulled him to Mark Stoneman at deep mid-wicket.

"Durham outplayed us in all facets. They out-bowled us in both innings and they dug in at crucial times and out-batted us. To score 300 on this pitch was well over par.

"We're disappointed. Our plans and preparation were good, the effort was excellent but execution of plans was where we lost it.

"Things didn't run for us this week, but equally we can't have any complaints. We were outplayed and thoroughly beaten."

"The win in itself was good and the way the team played was admirable.

"The bowling throughout both innings was exemplary and with the batting, despite losing some early wickets, we knuckled down and dug in and the middle order got themselves established.

"It is important the team keep their feet on the floor and don't relax. They need their preparation to be right and they need to take this confidence forward in a level way and constructive way because we have a very tough game starting at Nottingham next Wednesday."

"After their narrow defeat by Sussex three weeks ago Durham looked dead and buried. They were without a win in 10 and seemingly destined for second division cricket next season.

"Coach Geoff Cook and new captain Paul Collingwood maintained it was not over. All they needed was a win to turn things around. And while I didn't share their confidence what has happened since has given them a major boost.

"They jumped four places as a result of this, their second championship win in a row, their third first-class win in a row following victory over Australia A last week.

"It was nice to go into day three knowing a win was on the way. They have a tough game at Notts next week but at least they now travel with confidence and off the bottom of the table for the first time."