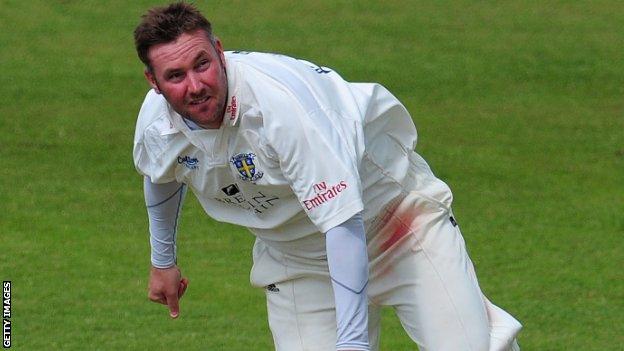 Off spinner Blackwell (4-47) was aided chiefly by paceman Boyd Rankin (3-72) as Middlesex were bowled out for 287.

The Bears then reached 21-0 in reply before rain brought a premature close.

Warwickshire's cricket was perhaps not as relentless as might be expected of a side who head the table by 11 points with a game in hand.

Their seamers were responsible for 11 no-balls and two wides, but some measure of control was achieved by Blackwell as Middlesex lost their last five wickets for 71.

The former England spinner Blackwell, who joined Durham from Somerset in 2010, had previously taken just nine wickets in five Championship matches this season. But he did take a career-best 7-52 against Australia A this month.

Dexter placed an obstacle in the way of title-chasing Warwickshire for the second time this month, having hit an unbeaten 84 in the recent meeting at Uxbridge.

That was only his second half-century of the season and this was the first time he has reached three figures in the Championship in 16 months.

Having led Middlesex to promotion last season, he temporarily gave up the captaincy in order to concentrate on his batting after a lean start to the summer.

"Warwickshire will rue some cheap runs that got away, including the numbers of extras, while Middlesex will feel they've come up short with their total after recovering from 121-4 only to lose their last six wickets for 71 runs.

"Neil Dexter rode his luck at times for his century, a number of runs coming through the vacant third man region, but he didn't offer a single chance.

"His quiet celebration of his first ton of the season, coming on his 28th birthday, reflected what has been a tough year for him during which he has temporarily stepped down as captain of the Championship side."