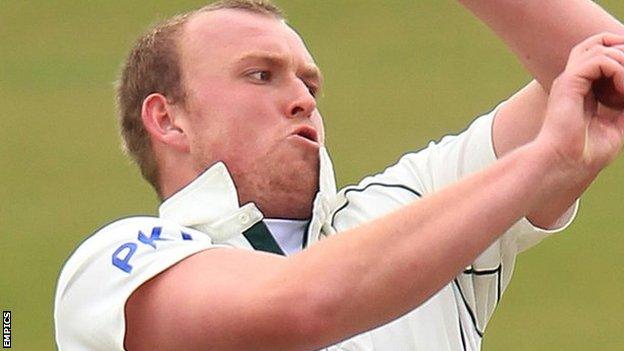 Luke Fletcher was among the wickets on his return to the Nottinghamshire side on a rain-hit day against Durham.

Notts, who are missing Harry Gurney and the Championship's leading wicket-taker Andre Adams due to injury, reduced Durham to 85-4 before an early close.

Fletcher, who made the last of this season's four appearances against Worcestershire in April, took 2-26.

Mark Stoneman's 46 was the highlight for Durham, while Ben Phillips and Andy Carter also took wickets for Notts.

"With James Taylor and Samit Patel on international duty and Andre Adams and Harry Gurney nursing injuries, the Notts squad had a bit of a thread-bare look about it, but it was clear their replacements were itching for the chance of first-team cricket.

"Luke Fletcher winkled out both openers - Will Smith leaving a straight one and Mark Stoneman edging behind, while Andy Carter also returned with a key wicket.

"Yet again though, rain wiped out two full sessions and Notts' hopes of closing the gap at the top will clearly depend on the elements as much as their own skills."